Shenzhen Airlines is a sponsor of the World University Games, which will be held in Shenzhen this coming August. To celebrate this event, the airline has just had four 737-800s delivered in a themed livery.

With a fleet of over 100 narrowbody aircraft (a mix of A320 series aircraft and various 737 types), Shenzhen Airlines is China’s fourth biggest domestic carrier (after China Southern, China Eastern and Air China) with around 7% of seat capacity and flights based on schedule data provided to OAG. The carrier operates a total of 137 domestic airport-pairs involving 58 Chinese airports, plus nine international routes. Last year, the airline carried 16.5 million passengers, up 9% on the previous year. However, in 2003, Shenzhen Airlines transported just 3.5 million passengers and in five of the following six years, passenger numbers rose by at least 25% per annum. (Source: ICAO) 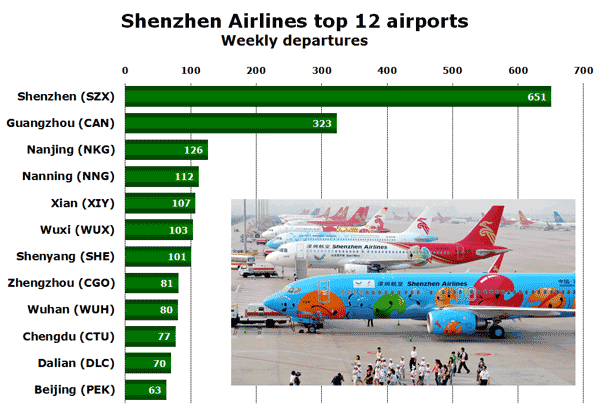 Just three of the airline’s domestic routes are operated with more than four daily flights. Shenzhen to Hangzhou is served five times per day, while Nanjing and Beijing are both served six times per day from Shenzhen.

At present, the airline operates just nine international routes, which are summarised in the following table.

The airline’s first flight to Taiwan took place on 15 December 2009 between Shenzhen and Taipei and carried more than 120 people on a 737-800. Originally, the service was operated just twice weekly, but frequencies have gradually been increased so that flights are now operated daily.

According to the airline, it plans to have at least 180 aircraft by the end of 2015 and also expects to operate wide-body aircraft.