Routes to Germany, the second-biggest Spanish tourism market, are also the only services to have shown decline this summer as others display double-digit growth – UK-Spanish services were up 13% in May. As Germany’s economy is booming, this year’s new passenger taxes are the only credible explanation.

Spain’s economy is probably more dependent on in-bound tourism than any other major economy in Europe, so this week anna.aero takes a look at the latest trends in air travel demand at Spanish airports using data for May. Passenger numbers in May across all Spanish (AENA) airports were up 6.4% to 17.9 million, after being up almost 5% in the first quarter of 2011. 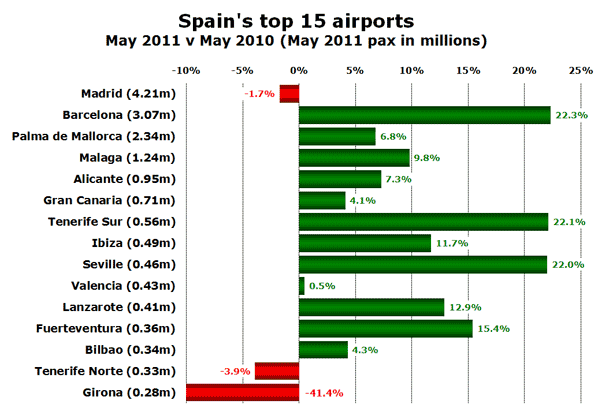 The majority of Spain’s busiest airports all showed solid growth in May, with some notable exceptions. Madrid Barajas, the country’s busiest airport, reported an almost 2% reduction in passenger numbers, while Girona (north of Barcelona) has seen a 40% reduction in demand as a result of Ryanair’s dispute with the airport and its decision to increase capacity at Barcelona’s main airport. 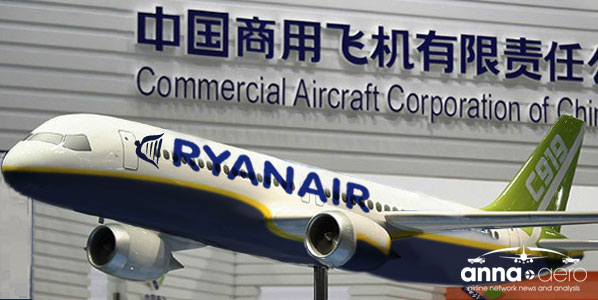 Spain's biggest airline: Iberia was still (just about) the biggest Spanish airline in 2010 when we last analysed AENA airport data for 2010. However, there is no longer any doubt that Ryanair now dominates as its Spanish passengers grew by over 40% in May while Iberia's declined 20%. Ryanair also announced an MOU at the Paris Air Show this week in which it agreed to assist the Commercial Aircraft Corporation of China (COMAC) to develop the new 200-seat C919 which should become available from 2018 onwards.

When we analysed AENA airport data for 2010 we revealed (somewhat controversially it seems) that Iberia was still the leading airline in terms of passengers passing through Spanish airports, just ahead of Ryanair. However, now there is no longer any debate as Ryanair passenger numbers grew by over 40% in May (compared with last May) while Iberia’s declined by 20%. 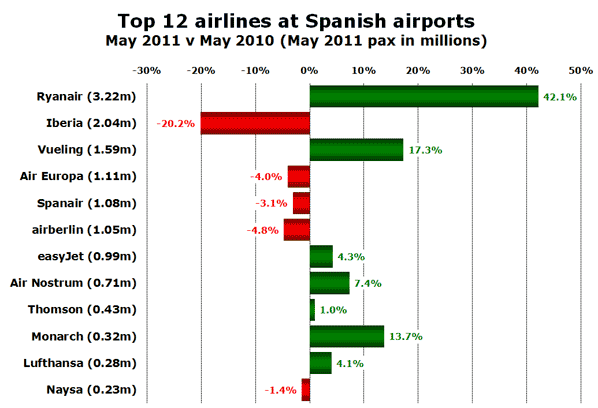 Source: AENA NB. The airberlin group of airlines (which also includes Vienna-based flyniki) was up 2.4%.

Spain’s other major ‘legacy’ carriers, Air Europe and Spanair, have also seen a reduction in passenger numbers, though Air Nostrum and Vueling have seen year-on-year growth.

When analysed by country market all of Spain’s top 10 international markets saw growth of at least 7% in May, with one notable exception. The second biggest country market, Germany, witnessed a 1% decline in passenger numbers. At the beginning of the year the German government introduced an ‘eco-tax’ with the sole intention of raising money for the government. While the German economy continues to prosper it seems that some leisure travellers may have been put off by the rise in air fares that resulted. 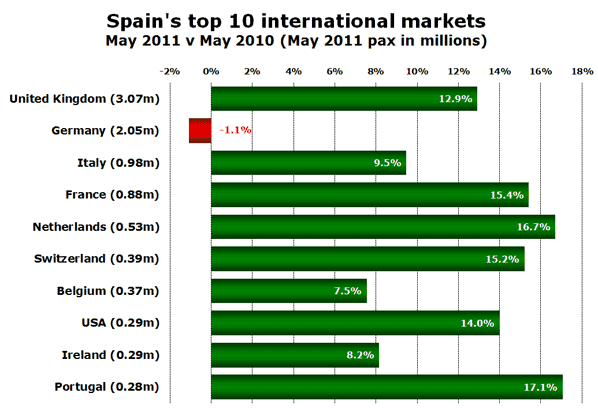 It is worth noting that Lufthansa actually increased passenger numbers between Germany and Spain, but airberlin (which is almost four times bigger than Lufthansa in this market) carried almost 5% fewer passengers in May, while Condor and TUIfly also both cut capacity in the Spanish market in May. Even Ryanair barely grew capacity on its German routes

Conversely, the UK market was up an impressive 13%, with easyJet, Thomson and Monarch all reporting passenger growth, and Ryanair also increasing capacity in the UK – Spain market by more than 15% in the last year.

Spanish tourism is likely to benefit this year from the re-allocation by tour operators of some capacity away from North Africa (notably Egypt and Tunisia) to more ‘stable’ summer-sun destinations such as Greece, Portugal and Spain.