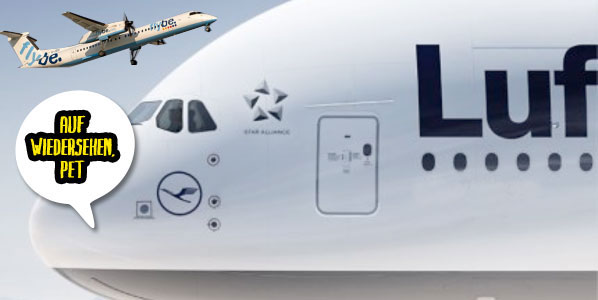 Flybe has problems with Frankfurt services as Lufthansa’s competing links grow by offering connections through its hub.

When Flybe completed the acquisition of British Airways’ UK regional operation (British Airways Connects) in March 2007 it inherited that airline’s network which included direct services from Birmingham and Manchester to several major European cities such as Brussels, Düsseldorf, Frankfurt, Milan, Paris and Stuttgart. However, from the end of July Flybe will no longer operate its Birmingham – Frankfurt and Manchester – Frankfurt services, leaving its Southampton service as the only remaining link with Germany’s busiest airport.

Fewer frequencies, smaller aircraft and competing with Lufthansa to its hub

Analysis of the weekday schedule available to travellers on both routes reveals some of the problems Flybe is facing.

Flybe operates just two daily flights on weekdays compared with Lufthansa’s four, providing less schedule flexibility for the key business traveller market. It also operates smaller, slower Q400s compared with Lufthansa’s mix of its own 737-500s and subsidiary British Midland International’s A320s. As a result on the Birmingham route Flybe operates 28% of flights but has just 17% of weekly seat capacity. On the Manchester route the figures are 29% and 18%, the difference explained by Lufthansa having one less frequency at weekends.

Flybe will continue to serve Frankfurt from its Southampton base for the foreseeable future. It currently offers six weekly flights between the two cities using a Q400.

Lufthansa only competes on two of these nine routes (both to Düsseldorf) and offers similar frequencies and capacity. Since Düsseldorf is not a Lufthansa hub in the same way as Frankfurt, both airlines are in effect competing for point-to-point business giving Flybe a better chance.