Nordic airports reporting solid growth in 2010-11; Keflavik, Gothenburg and Malmö all up more than 20% in May Linnéa, a young Gothenburg consumer, cuts the ribbon for Norwegian’s new route to Pristina (Kosovo) – one of five new services launched from Gothenburg this week. As more future travellers set about attacking the cake, Norwegian took the opportunity to announce three more winter routes from the Swedish airport to Gran Canaria, Tenerife and Salzburg.

This week we take a look at the performance during the last year of our basket of 12 Nordic airports. These airports were hardest by the airspace closures following the volcanic ash cloud emanating from Iceland last April. As a result the percentage change in year-on-year traffic figures shows a huge drop last April, and a compensatory spike this April, with all airports reporting at least a 35% growth in traffic figures. More revealingly, May data shows nine out of the 12 airports growing by at least 10%, and the remaining three (Billund, Copenhagen and Stockholm Skavsta) all reporting growth of at least 5%. 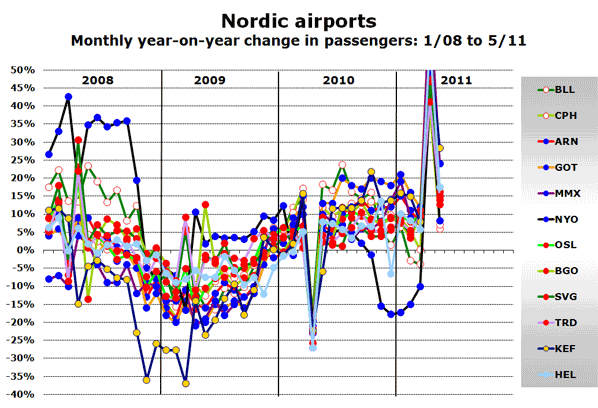 Since last April the only airports reporting a year-on-year drop in traffic in any month were Keflavik (in May 2010), Helsinki (in December 2010), Billund (in both February and March 2011) and Stockholm Skavsta (down by more than 10% from November 2010 to March 2011 as Ryanair reduced capacity during the less profitable / unprofitable winter peak period). In the most recent month (May), three airports reported year-on-year growth of more than 20%; Gothenburg, Keflavik and Malmö.

Fourth ranked Helsinki saw only modest growth of 1.6% in 2010, and recently lost easyJet as a customer at the airport when the London Luton based carrier axed its three routes to London, Manchester and Paris. However, pan-Nordic carrier has now set up a base in the Finnish capital and hopes to do better than either easyJet or now-defunct Danish LCC Sterling which tried something similar several years ago.