Phoenix airport just hanging on to top 10 ranking; expanding Southwest and US Airways share 80% of flights Montreal’s Mayor Gérald Tremblay expresses his joy at the new weekend/seasonal Air Canada service which had brought him to Phoenix last November. Tremblay is flanked by PHX airport director Danny Murphy (left) and Mayor of Phoenix, Phil Gordon. PHX traffic was up 4.5% in the first four months of 2010, but still below the levels of demand in 2007-08. 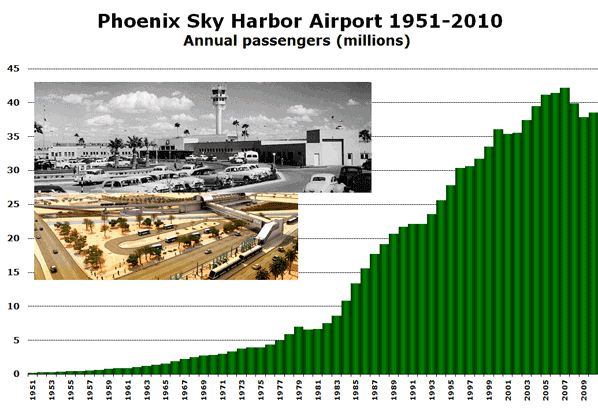 So far in the first four months 2011 passenger numbers are up 4.5% compared with 2010, but still below the levels of demand in 2007 and 2008. Traffic peaks in March with a late-summer dip in September. 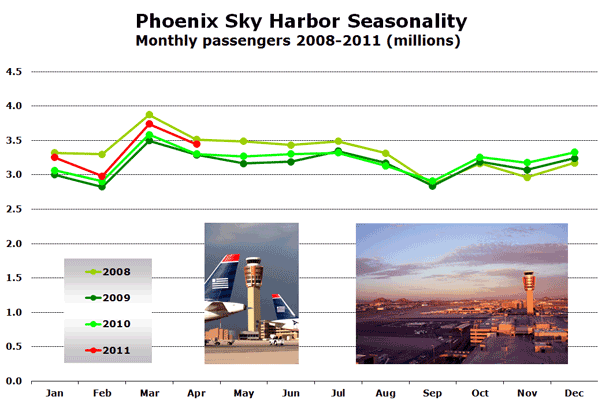 Southwest and US Airways share over 80% of flights and capacity

Two airlines, Southwest and US Airways, share over 80% of the airport’s flights and weekly seat capacity. US Airways acquired a major presence at the airport after the merger with America West in 2006/07 and now operates non-stop to over 70 destinations from the airport including nine to Mexico, three to Canada and one to Costa Rica.

Other airlines operating domestic routes from the airport are AirTran, Alaska Airlines, Frontier, Great Lakes, Hawaiian and JetBlue. AeroMexico flies daily to Hermosillo, while Air Canada flies daily to Toronto and WestJet links the city it to its Calgary base with year-round daily flights. In winter WestJet also offers low-frequency seasonal services from a number of other Canadian destinations such as Edmonton and Vancouver. 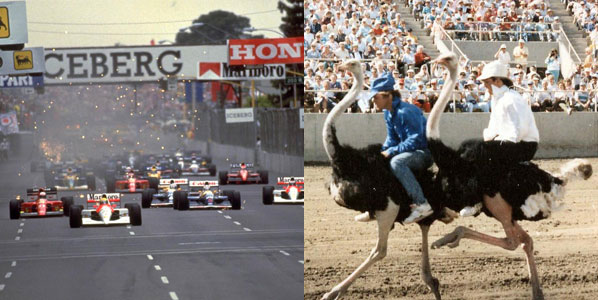 Formula 1 turkey. While Phoenix hosted the United States Grand Prix for three years between 1989-91, it wasn’t the hit the city’s tourist chiefs had hoped for, attracting an estimated 15,000 to line the downtown street circuit each time. In contrast the annual Ostrich Festival in nearby Chandler, now in its 23rd year, regularly draws crowds in excess of 75,000. It just goes to prove that local is best. (Please don’t write to anna.aero – we read this in The Prescott Courier.)

Despite Southwest, United and US Airways all serving the Los Angeles market with around 150 departures per week between them, both American and Delta earlier this year launched four-times daily flights on the route, presumably to help provide feed for their long-haul services from the Californian airport.

Fares rising but still below the national average

According to US Bureau of Transportation Statistics average annual domestic air fares have grown faster at Phoenix Sky Harbor airport during the last decade than at any of the other top 10 airports (ranked by US originating O&D passengers). In 2000 Q4 the average domestic itinerary fare was $269 at Phoenix and in the corresponding quarter 10 years later it had risen by 20% to $323. However, this was still the third lowest (behind Denver and Atlanta) of any airport in the top 10 and 4% below the national average of $337. While average domestic fares across the US rose by 5.1% between 2009 Q4 and 2010 Q4, average domestic fares at Phoenix increased by 12.7%.