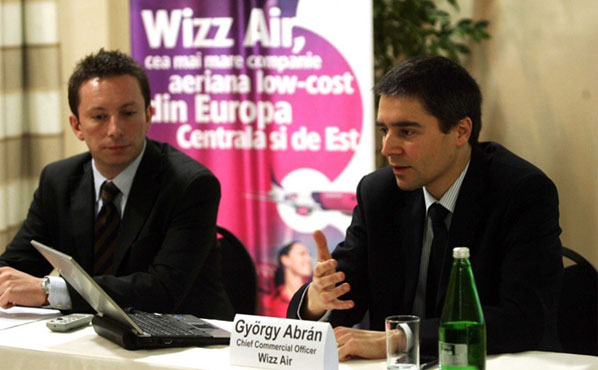 Wizz Air’s CCO György Abrán in front of a banner declaring in Romanian: “Wizz Air – the largest airline in Central and Eastern Europe.” At a press conference in mid-April Abrán announced that, as a result of a dispute over charges, Wizz would cut an aircraft at Romania’s Cluj-Napoca Airport and move it to the new Targu Mures base – a capacity shift estimated by Wizz to be worth some 240,000 passengers.

Analysis of OAG schedule data by anna.aero this week reveals that Romania is now Wizz Air’s second biggest country market (after Poland) with over 200 weekly departures from Romanian airports. This means that Romania has overtaken Italy and the UK in the last 12 months, and is the fastest-growing of the airline’s base countries. Wizz Air operates from four airports in Romania; Bucharest Baneasa, Cluj Napoca, Targu Mures and Timisoara. The number of flights from Romanian airports has grown by around 25% in the last year while across the airline’s entire network flights have grown by an estimated 10%. 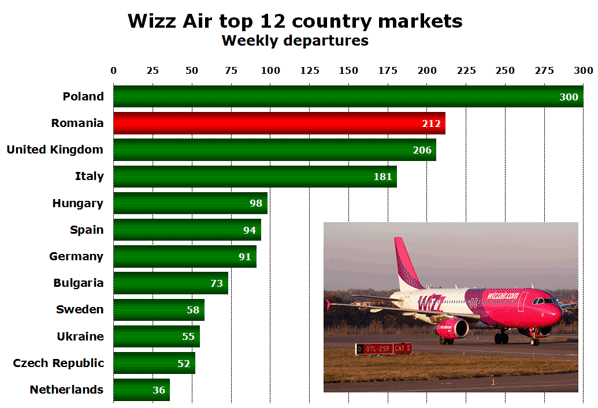 As a result Wizz Air is now only just behind Tarom in terms of weekly seat capacity at Romanian airports. Assuming its load factor is higher than that of Tarom it may already be the leading carrier in terms of passengers in the country. It already operates more routes than Tarom, with 52 routes split between Bucharest (20), Cluj Napoca (14), Timisoara (10) and Targu Mures (eight). This week saw the launch of new services from Targu Mures to Barcelona, Madrid and Milan Bergamo.

Of Wizz Air’s 212 weekly departures scheduled for the first week in August from Romanian airports, 86 are to Italy, 52 to Spain, 28 to the United Kingdom and 17 to Germany. These four country markets account for 86% of the airline’s routes from Romania. Wizz Air does not operate any domestic services in Romania.