Frankfurt based Condor Flugdienst (or Condor as it is more usually referred to) remains part of the Thomas Cook Group. Its fleet of 13 757s, 12 A320s and 10 767s has remained almost unchanged in recent years. At Frankfurt the airline has around 3% of all scheduled flights, ranking it second (a long way) behind Lufthansa. Last week new services to Calgary and Seattle were launched as the airline tries to widen its destination portfolio which has long been focussed on Spain, Turkey and Greece. 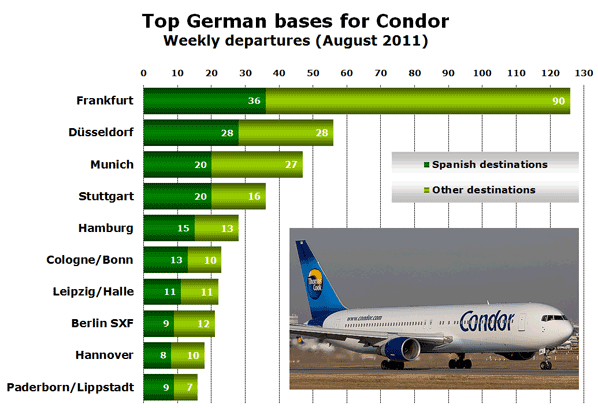 Since our last analysis of Condor Paderborn/Lippstadt has returned to the airline’s network of German bases. Since the beginning of last winter flights have started to 10 destinations, including five in Spain and three in Greece. Cake of the Week! Stefan Schulte, CEO Fraport, and Ralf Teckentrup, CEO Condor Airlines, cut the cake and ribbon for the airline’s two new routes to North America from Frankfurt – Seattle and Calgary.

Last year Condor flew just under 2.6 million passengers between Germany and Spain, a market that is currently struggling somewhat as a result of the German eco-tax which has forced airlines to raise fares. According to statistics from AENA Condor’s traffic numbers at Spanish airports peaked in 2006 at just over 4.1 million, at a time when Spanish routes made up over 50% of the airline’s annual capacity.

Since the beginning of the year Condor has added new routes from Frankfurt to Recife (Brazil), Calgary (Canada), Split (Croatia) and Seattle (USA), with plans announced to serve Nairobi (Kenya) and San Juan (Puerto Rico) starting in December. The airline is also offering flights to Fort Lauderdale during the winter season for the first time.