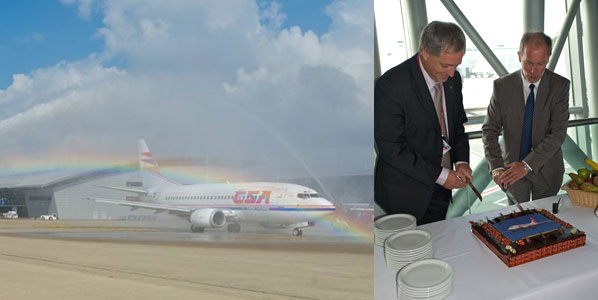 CSA next year celebrates 75 years at Brussels Airport and starts the celebrations early by this year adding flights from Bratislava. A rainbow formed as the inaugural flight was welcomed to the Belgian capital where Jos Stroobants, Brussels Airport’s Director Aviation Development, and Pascal Van De Moortel, CSA’s Country Manager, cut the cake. In Bratislava, Marios Kountourides – Cypriot Ambassador to Slovakia – cut the ribbon to launch CSA’s Larnaca services. Each of the route launch celebrations had a culinary theme, for example serving passengers French, Spanish and Belgian treats.