Last week saw the opening of Czech Airlines’ new single aircraft base at Bratislava in Slovakia which will initially offer 21 weekly departures across a network of six international destinations in Western Europe (Amsterdam, Barcelona, Brussels, Larnaca, Paris and Rome), in addition to the carrier’s long-standing service to Prague. Although Ryanair is the busiest airline at the airport it does not have any aircraft based there, operating all routes with aircraft based elsewhere on its network. Bratislava’s airport traffic peaked in 2008 with 2.2 million passengers, at a time when SkyEurope, the locally-based LCC, was still active. Sadly, the carrier ceased operating on 1 September 2009 after seven years of unprofitable operations, and the airport’s passenger numbers suffered. 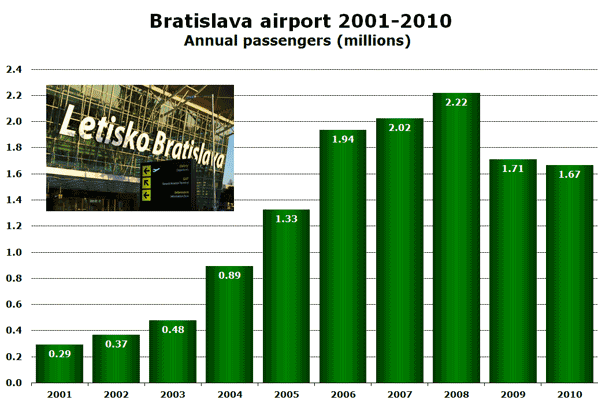 Tulips greet Bratislava’s passengers for CSA Czech Airlines’ new Amsterdam services. Those flying to Brussels were served Belgian beers (presumably pils-loving Czech Airlines would find chocolate-themed sterotypes unacceptable). "We’re celebrating the first flights of six new Czech Airlines destinations from with a festival of the foods and traditions of the countries to which the airline will be flying – and the possibilities of connecting to the whole world through these hubs," says Tomáš Kika, Director of Sales and Marketing for Bratislava Airport.

Ryanair has served over 20 destinations from Bratislava

Ryanair first started serving Bratislava in October 2005 when it began flights from Frankfurt Hahn and London Stansted. Its network has grown significantly and last summer it served 21 destinations non-stop. This summer the network has been trimmed back to 17 routes with the demise of summer services to Bari, Bologna, Bristol, Pisa and Stockholm Skavsta, but the addition of Gran Canaria. The airline’s summer 2011 network is summarised in the following table.

Last year the UK – Bratislava market was just over 495,000 passengers (Source: UK CAA) down 11% on 2009, representing around 30% of the airport’s total demand. Traffic during the peak summer months of July and August is typically around 150% higher than in the off-peak months of December and January. 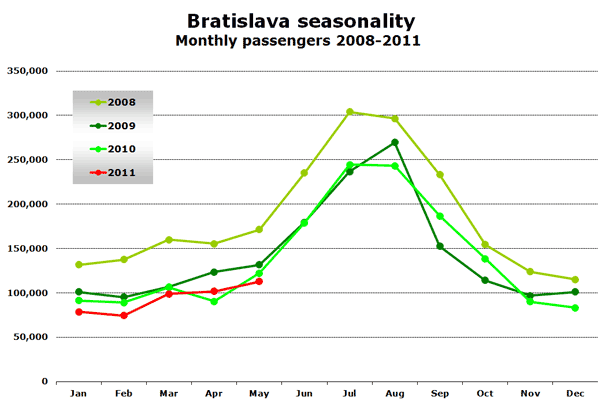