Ryanair challenging easyJet to be #1 in Edinburgh 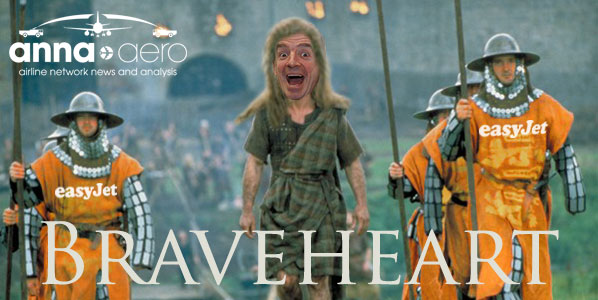 “Every man dies, not every man lives.” OK, we’ve forgotten why we ever thought this was a good way of illustrating Ryanair’s close rivalry with easyJet at Edinburgh (20.9% of seat capacity versus easyJet’s 22.1%). Flybe has the most weekly departures – over 240 – but Ryanair now has the most destinations: 37 compared with 20 for easyJet, and 18 for Flybe.

Back in 2001 Ryanair had shown little interest in serving the Edinburgh market, having developed Glasgow Prestwick as its main (low-cost) base to serve the Scottish market. Then Go, the low-cost airline set up by British Airways, had the temerity to announce its intention to serve Ryanair’s home base of Dublin from both Glasgow International and Edinburgh. This proved too much for Ryanair and the airline responded by announcing plans to operate its own flights between Dublin and Edinburgh starting in September 2001. Within a year Go had dropped the routes and had been taken over by easyJet.

It took Ryanair another five years before it started its second route to the airport (Shannon in October 2006) and another 18 months before six further routes were added from across Ryanair’s extensive network of European bases. 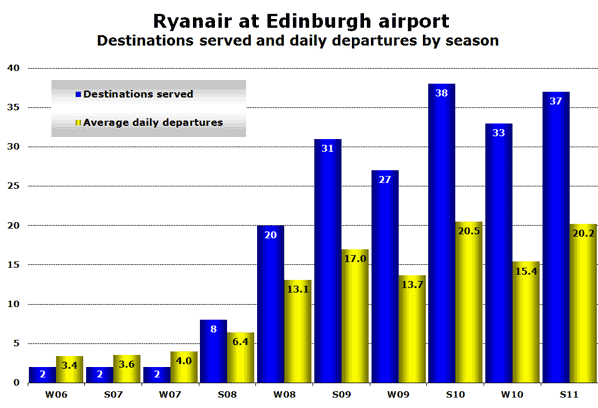 Source: OAG Max Online for February and August for each year.

A total of 50 destinations have been served by Ryanair from Edinburgh in recent years, though no more than 37 in any given season. Destinations that have been tried and found wanting for whatever reason include Altenburg (Leipzig), Bournemouth, Cagliari, Carcassonne, Girona (replaced by Barcelona), Grenoble, Haugesund, Limoges, Lübeck (Hamburg), Shannon, Wroclaw and Zadar.

Only just behind easyJet in terms of weekly seat capacity

This summer Ryanair’s Edinburgh network will make it the airport’s second biggest airline in terms of scheduled seat capacity, with 20.9% of the total, just behind easyJet with 22.1%. However, both of these carriers are well beaten by Flybe when it comes to most weekly departures with the Exeter-based regional airline having over 240 (nearly all on domestic routes) compared with 180 for easyJet and 142 for Ryanair. Where Ryanair does win is with the most destinations served; 37 compared with 20 for easyJet and 18 for Flybe.

Last year Edinburgh airport handled a total of 8.6 million passengers (down 5%) making it the UK’s second busiest non-London airport after Manchester, and just ahead of Birmingham. 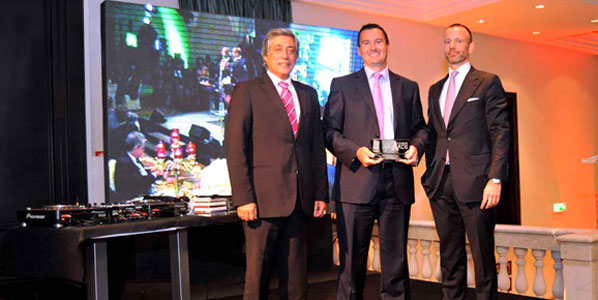 Edinburgh Airport won “Best European Airport: 5m -10m Passengers” at the 7th Annual ACI EUROPE Best Airport Awards in Lisbon earlier this month. Edinburgh’s Managing Director, Kevin Brown, said: “The past year has been challenging to say the least, we’ve dealt with snow, ash, strikes, while all the time attracting more airlines and routes and developing our customer experience. We’ll continue to do just that as we work with our airlines and partners to grow Edinburgh into a truly leading European Airport.”