Where will AirAsia fly with all its future Airbus deliveries?

Lots more planes for lots more routes – over 80 ‘standard’ A320s are still to be delivered to AirAsia, plus the 200 New Engine Option (neo) A320s confirmed during the recent Paris Air Show.

Even before AirAsia placed its mega-order for 200 Airbus A320neo aircraft at the Paris Air Show, the carrier already had outstanding orders for a further 86 ‘basic’ A320s as well as currently operating 89 A320s (53 by its Malaysian airline, 20 by Thai AirAsia and 16 by Indonesia AirAsia). So what is the airline group going to do with all these next-generation A320s when they start being delivered at the rate of around 12-15 per year from 2016?

Besides simply using the new aircraft to phase out older aircraft, there are many current indicators to confirm that much new capacity will be needed to absorb growth. During the last 12 months the AirAsia group fleet has grown from 85 to the current 93 units (which still includes four 737-300s in Indonesia). At the same time passenger numbers grew 13% from 22.7 million in 2009 to 25.7 million in 2010. In the first five months of 2011 the airline has seen passenger growth accelerate to 20.2%, to just over 12 million, suggesting that the airline is well on course to carry over 30 million passengers in 2011. 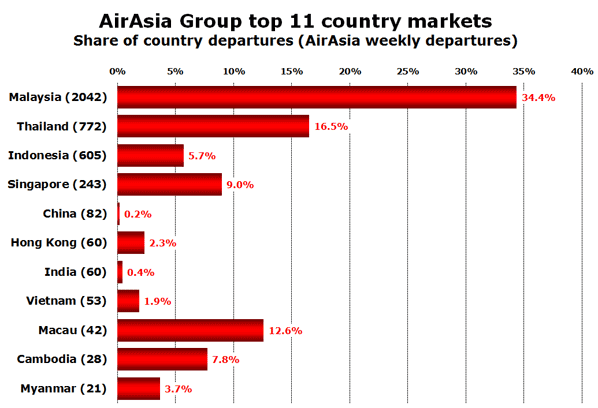 Apart from the three countries in which it operates airlines, only Singapore has more than 100 weekly AirAsia aircraft departures. (Although the Asian air travel market is growing faster than other parts of the world, it is also still a highly regulated region, hence AirAsia’s need to create local subsidiaries away from its home base of Kuala Lumpur.) At Malaysian airports AirAsia already operates just over one-third of all aircraft departures (over 2,000 per week) with its fleet of 53 aircraft. To achieve a similar market share in Thailand it would need to double its presence (from 20 to 40 aircraft) while in the large and highly-competitive Indonesian market it would need to increase its fleet six-fold (from 20 to 120 aircraft) to get a one-third share of the market.

In two of the region’s fastest-growing major markets (China and India) AirAsia has less than half of one percent of the market, as a result of operating just 11 routes to and from China and nine to India. 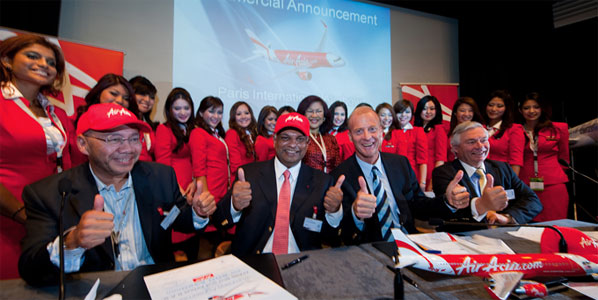 AirAsia CEO Tony Fernandes CBE signs the paperwork for the 200 A320neos. Fernandes steers around the lack of deregulation in Asia by opening up local subsidiaries – his latest joint venture will be based in the Philippines at Clark’s Diosdado Macapagal International Airport near Manila, the former US air base.

At the end of March AirAsia revealed that agreement had been reached to start another joint venture airline, this time in the Philippines, to be based at Clark’s Diosdado Macapagal International Airport near Manila. Operations should start later this year. AirAsia currently operates daily flights to Clark from both Kuala Lumpur and Kota Kinabalu. 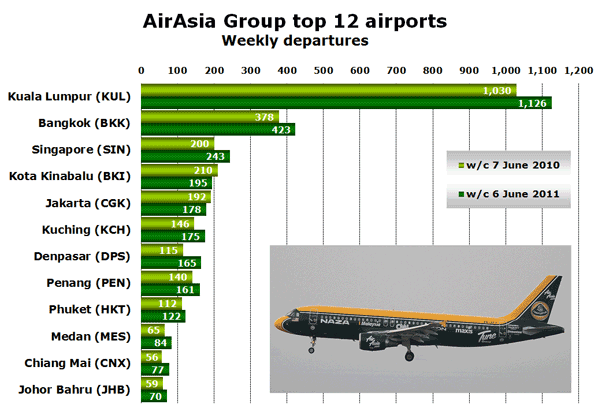 Analysis of the airline group’s busiest airports reveals how dominant Kuala Lumpur still is, but the airline’s biggest base in Indonesia (Jakarta) ranks behind both Kota Kinabalu (Malaysia) and Singapore (which is not a base). During the last year the number of flights has grown by 11% but at individual airports there are significant differences. Jakarta and Kota Kinabalu are both down 7% while Medan (+29%), Chiang Mai (+38%) and Denpasar/Bali (+43%) have all grown by more than 25%.

“Now everyone can fly” message to be spread further

The size of AirAsia’s order and no doubt some flexibility on timing, combined with how quickly it decides to refresh its fleet, combined with underlying market conditions (such as fuel prices), the pace of further liberalisation, and additional joint venture decisions, will determine how quickly AirAsia actually grows. But having secured such a large order (and volume normally equates to discounts even when buying ultra-expensive things like aircraft), and a track record of solid profitability, the indications are that AirAsia will continue to be the region’s biggest low-cost carrier and will be able to deliver its promise that “Now everyone can fly” to well, pretty much everyone.