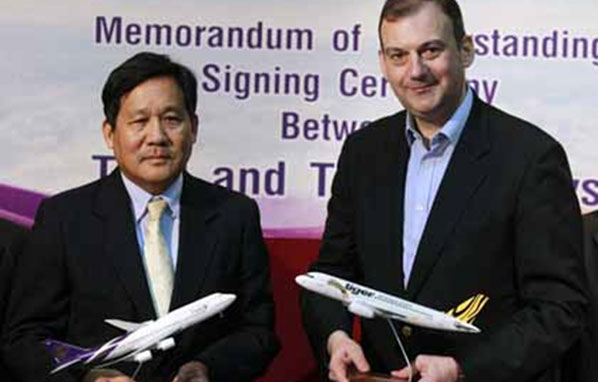 Thai Airways’ President Piyasvasti Amranand and Tiger’s President and CEO Tony Davis agreed an MoU for setting up Thai Tiger Airways last August. Hopefully, Tiger can eventually shake-off its woes caused by its Australian grounding and continue expanding through joint-ventures – the only vehicle for growth in regulated Asian markets.

Before Tiger Airways Australia’s alarming grounding, the airline group appeared to be following the AirAsia path to regional growth by investing in airlines in other countries. The airline had agreed to purchase a 33% stake in Mandala Airlines (in Indonesia), itself grounded and undergoing “financial restructuring”. In Thailand, Tiger plans to set up a joint venture with Thai Airways called Thai Tiger, in which Tiger Airways would hold 39%. Finally, in the Philippines, Tiger has purchased 32% of SEAIR. At the end of April, Tiger announced that SEAIR would start operating up to five daily domestic jet flights (using Tiger Airways A320s) between Manila and Cebu, followed by three daily flights between Manila and Davao. However, after local airline protests, the plans appear to be on hold as neither of the routes appear on Tiger Airways’ route map or in SEAIR’s schedules.

Generating 45% of Tiger’s revenues but 50% of costs

Tiger Airways began operations from Singapore in September 2004 before launching flights with its Australian subsidiary from Melbourne in November 2007. Both airlines operate 180-seat A320s of which the company currently has 26. In total, Tiger Airways Holdings Limited flew just under six million passengers in its last financial year, at an average load factor of just under 86%.

Figures revealed in Tiger Airways’ recent annual report for the year ending 31 March 2011 show that while the Singapore operation is profitable, the Australian operation is not. While the Australian operation now generates 45% of the company’s revenues, it also accounts for 50% of its costs. Tiger reported that in FY11, Australia represented a “challenging operating environment” with “one-offs” including “natural weather events and AVV (Melbourne Avalon) start-up costs”. It concluded that “network review likely to see more route suspensions” and that the carrier should “focus on profitable flying rather than growth”.

It was only last November that Tiger started flying from Avalon Airport, a secondary airport for Melbourne, initially to seven destinations. Three (Alice Springs, Mackay and Rockhampton) were dropped within weeks of starting (although, in effect, they merely returned to Melbourne Tullamarine Airport), while Adelaide, Brisbane and Gold Coast services were axed at the beginning of June, leaving just Perth and Sydney services from Avalon at the present time.

With eight daily flights between Sydney and Melbourne (Australia’s biggest domestic route with almost eight million passengers in 2010), this one route now accounts for 25% of Tiger Australia’s entire network capacity.

Tiger Airways Holdings Limited has responded to the crisis (which saw Tiger Airways’ shares fall, as Qantas and Virgin Blue saw their share price rise) by appointing the Divisional Vice-President of Cabin Crew Operations at Singapore Airlines, Chin Yau Seng, to the position of Executive Director. Remember, Singapore Airlines, is the single biggest investor in Tiger Airways Holdings Limited, and does not want to see its hard-earned and legendary reputation tarnished in any way by events unfolding in Australia. 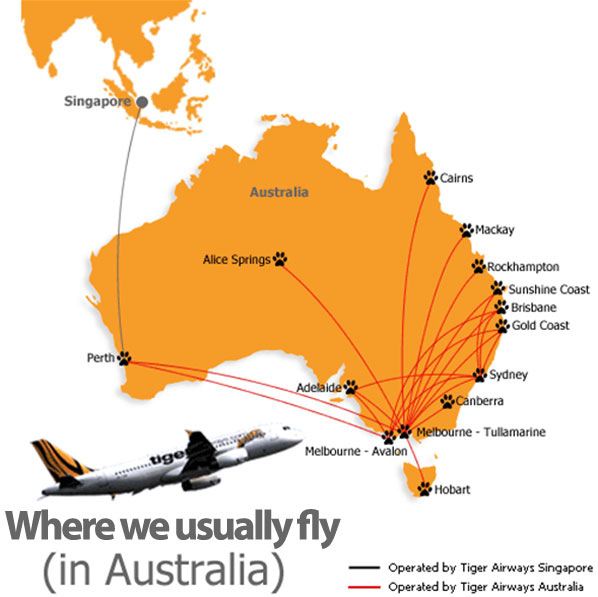