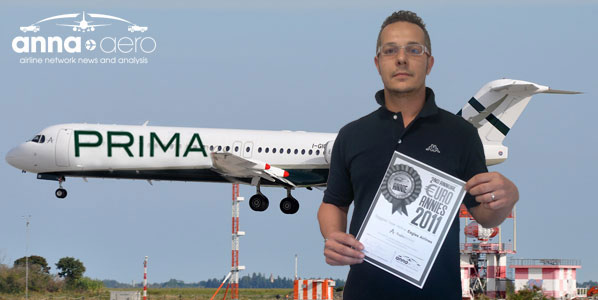 PRiMA’s Network Manager Manuel Pavan with the airline’s EURO ANNIE prize awarded in May for being the biggest new airline in the European market. Pavan tells anna.aero that the new Rome-Nimes service has started with a first day 38% load factor. Meanwhile, he’s also working on next winter’s plans “including the potential of Moscow, Kiev, Athens etc.”

Based at Venice’s Marco Polo Airport, Prima (full name Prima Aero Transporti Italiani) is the new name of Eagles Airlines, which itself was created from the ashes of Alpi Eagles. The airline has a fleet of three 100-seat Fokker 100s and, according to the airline’s booking tool, flies from six Italian airports (Bologna, Catania, Crotone, Reggio Calabria, Rome Ciampino, and Venice) and Nimes in France.

By examining the airline’s on-line booking tool (ultimately the best check of what an airline is actually planning to operate) for the week commencing Monday 25 July, the following non-stop routes are being operated from each airport.

The Bologna – Crotone, Crotone – Rome CIA routes start this week (7th July), initially with just two weekly flights, increasing to three from 25 July. To make way for these additional scheduled services, the airline is cutting back on its charter programme, which includes flights to Greece, Spain and Turkey. In total, Prima will operate just five scheduled routes in August, generating 38 weekly departures. On the Venice – Catania route, it faces competition from both Alitalia and Wind Jet, who both operate the route twice daily.

Nimes in the south of France handled 180,000 passengers in 2010, down 1.6% on the previous year. It currently has scheduled services to Brussels (Charleroi), London (Luton), and Liverpool provided by Ryanair, as well as seasonal flights to Palma de Mallorca operated by Air Nostrum on behalf of Iberia.

Other destinations being evaluated but not currently available

On the airline’s English-language website, it is still promoting a Venice – Paris route that appears never to have launched, while OAG data for August lists additional services from Italian airports in Lamezia Terme, Naples, and Verona as well as international flights to Bucharest, Paris and Skopje (Macedonia). When contacted by anna.aero, the airline indicated that it is evaluating several new destinations for winter, including Athens, Kiev and Moscow. Clearly, this is an airline that is still evolving and anna.aero will be keeping a close watch on when the airline does indeed start any further new routes.