Spain, USA and Ireland lead way in May for biggest volume growth from UK airports; Egypt and Tunisia still struggling 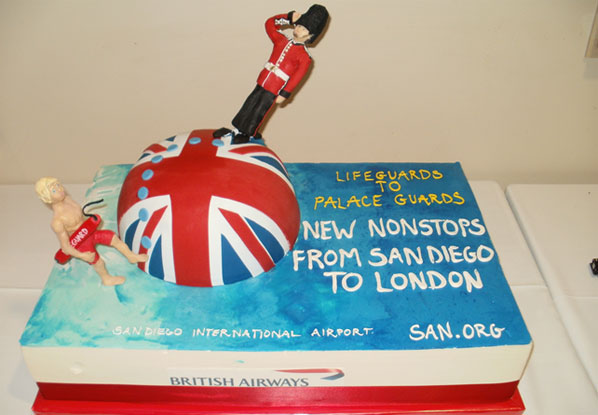 OK, observant anna.aero readers will notice this cake celebrates the resumption of British Airways’ London Heathrow to San Diego route on June 1. But it’s so darn good we wanted to use it again to illustrate the buoyancy of May’s UK-USA services.

Provisional route data from the UK CAA shows that international traffic from UK airports was up 7.7% in May, representing an additional 1.15 million passengers compared with May 2010. Analysis by country market reveals that (non-Canary Island) Spain gained the most additional passengers (over 260,000) representing year-on-year growth of 11.8%. When combined with growth of 19% (85,000 passengers) to the Canary Islands, traffic to and from Spain was up 350,000 passengers compared with last May. 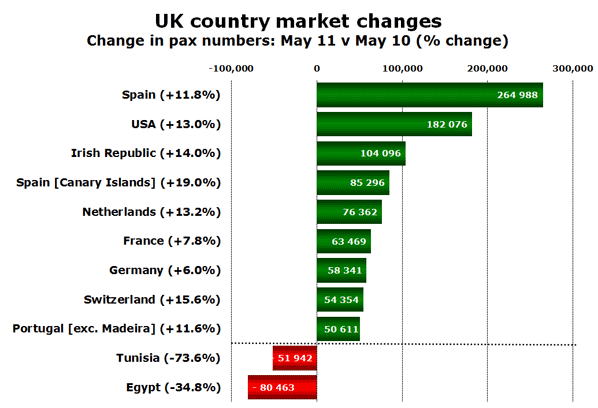 At the other end of the scale the domestic issues in Egypt and Tunisia earlier this year are still giving tourists cause for concern. Egypt lost over 80,000 passengers in May (down 35%) while Tunisia is down by just over 50,000 (a drop of almost 75%). Libya is down 100% with no commercial passengers in May, though Algeria and Morocco both showed modest growth compared with May 2010.

Thanks to new Ryanair services to Tallinn from East Midlands, Edinburgh, Liverpool and London Luton, Estonia’s market has grown by 186% from under 8,000 monthly passengers in May 2009 to over 22,500 monthly passengers, making it in percentage terms the fastest-growing country market from the UK this May.