Manchester back in favour with Ryanair; based aircraft will add 12 new routes this winter, eight more next summer 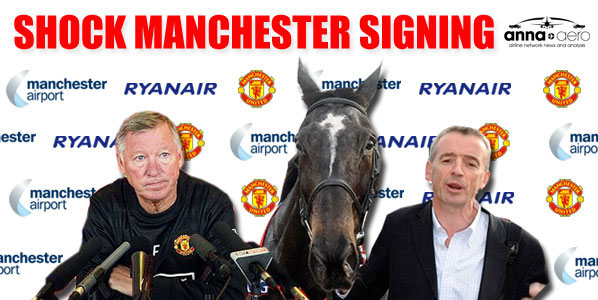 Ryanair’s announcement that it would make Manchester its 45th and newest base this October proves that despite issues with APD (Air Passenger Duty) and a sluggish economy the airline perceives that there is still plenty of potential for stimulating the UK leisure market.

Ryanair began flying to Manchester from Dublin in May 1994, but it would be almost 12 years before a second route was added, to Shannon, in February 2006. Then in 2008 the airline started serving Manchester from seven of its bases in mainland Europe; Barcelona (Girona), Bremen, Marseille and Milan (Bergamo) flights started in April, followed by Brussels (Charleroi), Düsseldorf (Weeze) and Frankfurt (Hahn) in October. A Cagliari service was added in April 2009 but at the end of the summer 2009 season all routes (with the exception of Dublin) were terminated, as the airline failed to agree terms with the airport regarding future plans.

Five routes started in April, 12 more this winter and eight next summer

Then in April of this year Ryanair added Manchester flights from Alicante, Faro, Madrid, Palma and Tenerife suggesting that the airline had found a new basis of co-operation with the airport. As a result Ryanair is already the ninth biggest airline at Manchester this summer based on weekly seat capacity, with Jet2.com in fifth and easyJet in sixth. 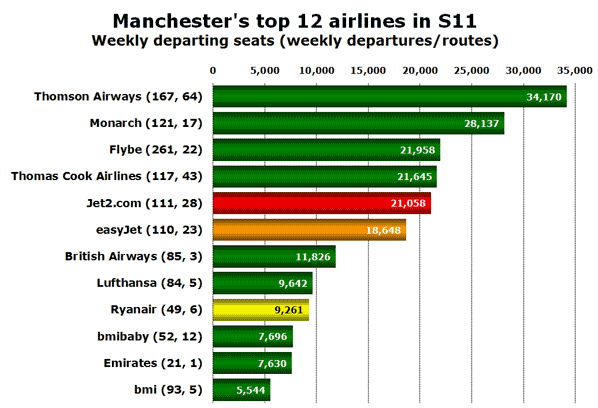 Two 737-800s will be based at Manchester this winter, doubling to four for next summer when additional new services to Estonia (Tallinn), France (Beziers, Biarritz, Tours), and Spain (Ibiza, Murcia, Reus, Valencia) will be added. 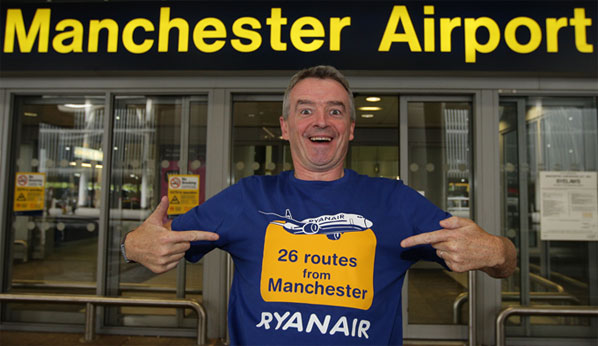 There are plenty of “low-cost” options for passengers at Manchester airport. Apart from LCCs such as easyJet, Jet2.com and bmibaby, three of the four biggest airlines at the airport during the summer are the hybrid/charter carriers; Monarch, Thomson and Thomas Cook. Of the 20 new routes that Ryanair is (re-)starting it competes directly with other carriers on five Spanish routes.

Ryanair also faces direct competition from a variety of carriers on its existing Alicante, Dublin, Faro, Palma and Tenerife services (but not Madrid). Indirect competition comes on Ryanair’s routes to Brussels, Frankfurt, Milan, Oslo, Paris and Rome where flag-carriers (such as Air France, Brussels Airlines, Lufthansa and SAS) and others (notably Flybe) operate to the main airport.

That leaves nine destinations that Ryanair will have an effective monopoly on; Beziers, Biarritz, Bremen, Katowice, Memmingen, Rzeszow, Tallinn, Tours, and Valencia. Curiously Manchester has no scheduled services to any Polish airports this summer.

It is worth noting that of the 26 routes Ryanair plans to operate from Manchester next summer, it has been operating to 13 of them (mostly the Spanish destinations) this summer from nearby Liverpool. It will be interesting to see what effect the growth of the Manchester operation will have on Ryanair’s network development at Liverpool from where this summer it is operating non-stop to 40 destinations.

In Manchester, Ryanair’s Michael O’Leary said: “With 26 routes on sale tomorrow, now Manchester consumers/visitors can beat the recession and escape easyJet’s and Jet2’s high fares by switching to Ryanair’s lowest fares and our no fuel surcharge guarantee to 26 exciting destinations in Italy, Germany and Spain among others. Ryanair’s two million passengers per annum will sustain up to 2,000 jobs at Manchester Airport and in the surrounding region.”