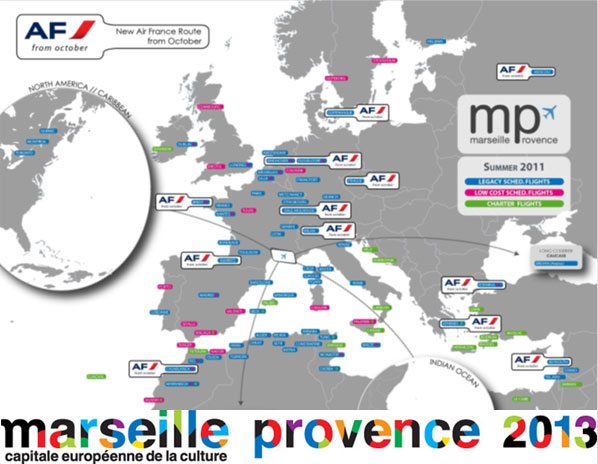 Air France this week finally revealed some concrete details regarding its much anticipated new focus on direct services from French regional airports. Bordeaux, Marseille, Nice and Toulouse are all set to benefit, but Marseille will be the first airport to test the new strategy. Air France already operates non-stop to 12 airports from Marseille (nine domestic and three international – Algiers, Rome and Tunis), and has now announced 13 additional routes starting from the beginning of October.

Air France’s new routes include four that will be served at least daily with Milan Malpensa even served twice daily. Year-round direct competition is limited to the Casablanca and Prague routes as Ryanair only operates Brest and Eindhoven as summer seasonal routes.

Having stated that it intends to “regain market share in a highly competitive context” it is interesting to see how Air France has performed in Marseille over the last 11 years. 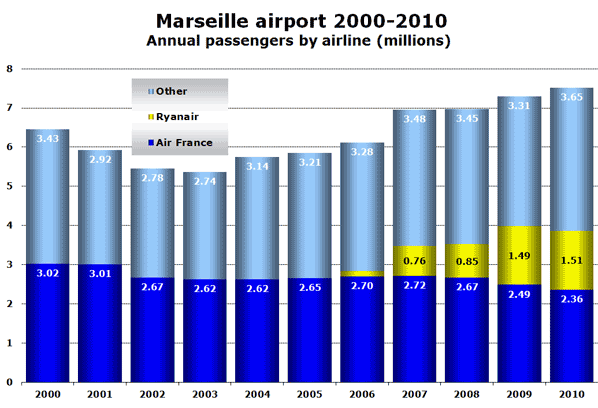 Air France’s passenger numbers fell from around three million to 2.7 million in 2002, and remained almost unchanged for the next six years, before falling in 2009 and 2010. Ryanair arrived at the airport in early 2006 (from Glasgow Prestwick) before establishing a base at the airport in November 2006. The airline rapidly established itself as the second biggest player at the airport. However, a difference in interpretation regarding EU employment law resulted in Ryanair removing its based aircraft from the airport earlier this year, though for this summer’s peak season it has brought back two aircraft enabling it to serve over 20 destinations from Marseille. The based aircraft enable the carrier to operate seasonal services to five destinations in Morocco and four domestic points in France.

According to Marseille airport both of Air France’s Paris routes (CDG and Orly) will gain roughly one daily flight, while all other domestic routes (with the exception of Lyon and Strasbourg) will see an increase in capacity thanks to the introduction of Airbus aircraft.

According to the airline’s official press release: “With this new project involving all its employees in France, Europe and the Mediterranean, Air France intends to initiate a virtuous circle that will enable its medium-haul operations to regain profitable growth, the foundation of the Air France-KLM group’s strategy, while offering customers attractive fares and ensuring long-term employment. Air France will thus be offering very attractive one-way fares starting from €50 including tax!”