British Airways’ 107 destinations from Heathrow compares poorly with Air France (148 from Paris CDG), Lufthansa (163 from Frankfurt) and other European rival airlines and hubs. Because the fashionably-green decision by the UK Coalition to cancel Heathrow’s Runway 3 was taken unilaterally, in European terms (Frankfurt gets its fourth runway in the autumn) the once-mighty BA and Heathrow lead continues to erode.

Now that the long-running industrial dispute with its cabin crew has finally been resolved, British Airways should be looking forward to a good summer. With the teething problems of Heathrow’s T5 just a distant memory, and the current coalition government’s political decision to abandon plans for a much-needed third runway (which in the short term helps by keeping out competitors), the immediate future of the UK’s flag-carrier looks healthy.

This week, anna.aero takes a closer look at the airline’s network (especially from Heathrow) and contrasts its development with that of its two biggest European rivals, Air France and Lufthansa. Analysis of airline data supplied to AEA shows that demand (as measure by RPKs – revenue passenger kilometres) was the same for British Airways in 2007 as it was in 1999. During the same period Lufthansa had grown by 42% and Air France by 54%. 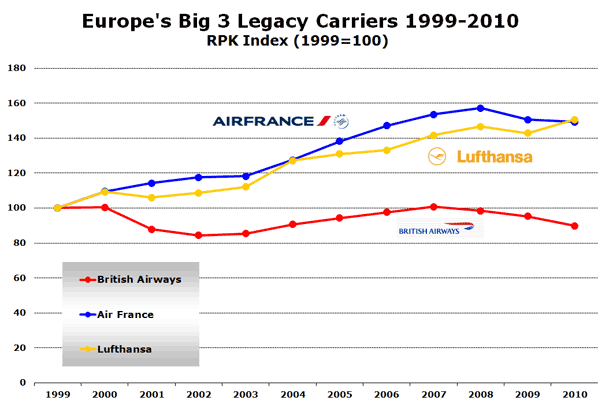 Between 2007 and 2010 demand at BA fell by 11%, at Air France it fell by just 3% while Lufthansa continued to report growth of 6%. Last year, according to AEA figures, British Airways carried just 30.5 million passengers while Air France carried 47 million and Lufthansa 56.6 million.

Heathrow ASKs over eight times bigger than at Gatwick

If measured by ASKs (Available Seat Kilometres), which is a better approximation to revenue than simply seat capacity, British Airways’ London Heathrow capacity is eight times bigger than at London Gatwick, which is itself over 10 times bigger than BA’s London City’s capacity. [In fact, the ASKs operated from London City are almost exactly the same as BA’s daily flight to Denver.] However, in terms of non-stop destinations served Heathrow has 107, Gatwick has 39, and London City 16. British Airways long ago abandoned the UK’s regional airports with no flights at all from Belfast or Birmingham and just two domestic routes (both to London) from Manchester. Similarly, at Glasgow and Edinburgh, BA now restricts itself to just serving London airports (City, Gatwick and Heathrow). By contrast, this week has seen the announcement by Air France to offer more international services from regional airports in France. 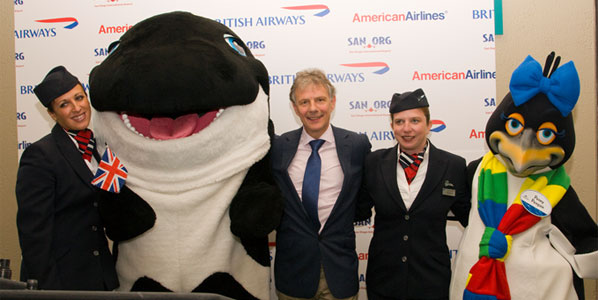 Smiling broadly, British Airways’ new Chief Executive Keith Williams poses with crew and Penny Penguin on arrival in San Diego from Heathrow on June 1 after BA resumed services to the Californian city for the first time since 2003. BA’s links to the US generate a massive 38% of its capacity (ASKs) at Heathrow.

BA’s 107 destinations from its main hub at Heathrow also compares poorly with its European rivals; Air France operates to 148 destinations non-stop from Paris CDG, KLM has 118 non-stop routes from Amsterdam, Lufthansa has 163 from Frankfurt and even Iberia has 108 from Madrid. This fact alone should highlight why the UK government has got its third runway decision so dreadfully wrong.

So what are the key characteristics of BA’s Heathrow network? 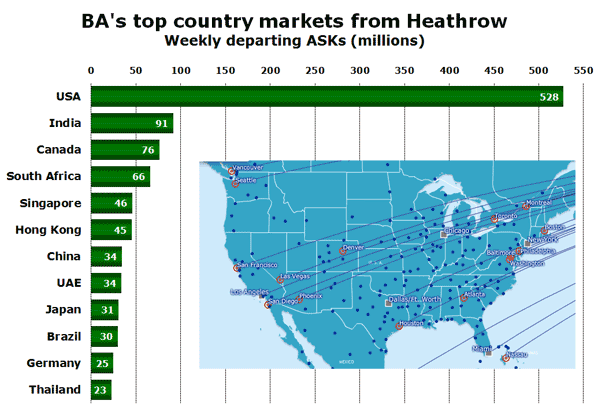 The US country market is over five times bigger than the second-biggest country market India in terms of ASKs. BA flies non-stop to 18 destinations in the US, the most recent of which, San Diego, began operating in June. The US market thus generates a massive 38% of BA’s capacity at Heathrow. Long-haul destinations dominate the top 12 with only Germany (ranked 11th) representing Europe. The UK ranks only 16th (just behind Nigeria) with BA’s domestic network from Heathrow now consisting of just Aberdeen, Edinburgh, Glasgow, Manchester and Newcastle services.

Looking at a route level, New York JFK leads the way thanks to its seven daily flights, followed by further away Los Angeles with its three daily flights. US airports account for seven of the airline’s top 10 routes from Heathrow as measured by ASKs. 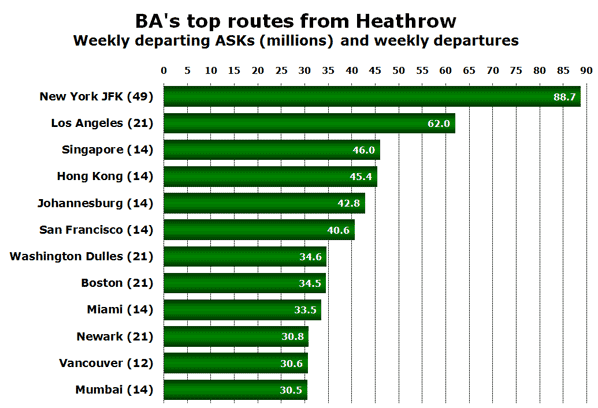 New York is such a key market for BA that it now also operates 11 weekly flights from London City with a 32-seat A318. However, with so few seats the operation represents less than 2% of BA’s ASKs at JFK.

Since the beginning of 2010, British Airways has been busiest at London City airport where it has added new seasonal routes to Chambery (winter), Faro, Ibiza, Malaga and Palma, and year-round services to Copenhagen and Stockholm Arlanda