Interjet has benefited from Mexicana’s demise and now ranks as Mexico’s second-largest domestic airline. To help the low-cost carrier expand further, an order was placed for 15 Sukhoi Superjet 100 aircraft earlier this year. The order was announced by Aleman Magnani, Interjet’s Vice Chairman, and Carlo Logli, CEO of SuperJet International.

Since launching in December 2005, Mexican LCC Interjet has carried over 16 million passengers and now has a 25% share of the domestic market (last May it was just 13%), beaten only by Aeromexico / Aeromexico Connect, which has a combined share of 40%. In May, the airline carried a record 540,000 passengers on its fleet of 29 A320s that each are equipped with just 150 seats (similar to jetBlue, but rather less than the 180-seat configurations used by the likes of Tiger Airways and Wizz Air). The carrier has undoubtedly benefited from the demise last August of Mexicana, as the rise in load factors in the second half of 2010 clearly shows. In 2010, the airline carried just over four million passengers, up 29% on the previous year. In the first five months of 2011, passenger numbers are up a massive 83% with the carrier on target to transport around six million passengers this year. 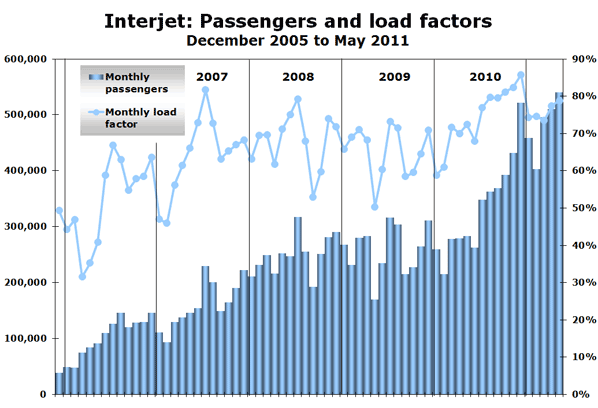 Source: Ministry of Communications and Transportation 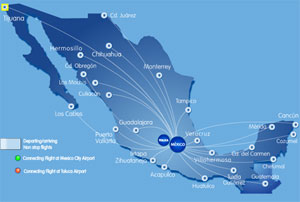 When it began operating, Interjet was based at Toluca, a secondary airport serving the Mexico City catchment area. It was not until August 2008 that the carrier was able to acquire slots at Mexico City Airport, after the demise of Aerocalifornia in June 2008. Since then, it has gradually shifted capacity from Toluca to Mexico City so that at present, 24 of its 37 routes involve Mexico City, while just seven routes remain at Toluca, all of which are also served from Mexico City. 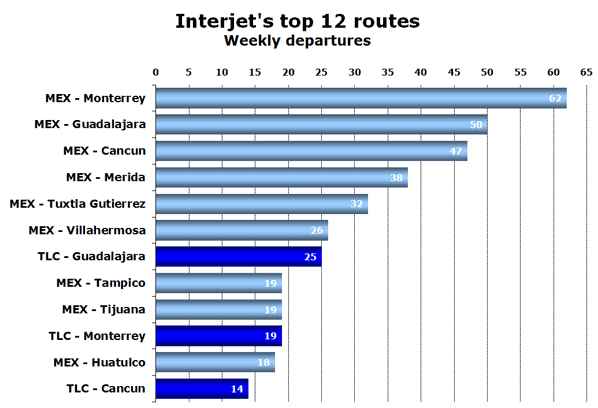 Of the airline’s top 12 routes (in terms of weekly departures), nine are from Mexico City (in pale blue) and just three from Toluca (in dark blue).

This month saw the launch of flights from Mexico City to Guatemala City in neighbouring Guatemala. Interjet had previously served the city from Toluca in late 2007 until the summer of 2008. Despite having stuck so far, in true LCC style, with a single aircraft type (the A320), Interjet announced in January that it had placed an order for 15 Sukhoi Superjet 100s, the first of which should enter service at the end of 2012.

To help finance these orders, the airline has been planning an IPO for this year, but the first attempt was scrapped at the end of June. It now hopes to complete the IPO later this year. The airline is currently owned by Miguel Aleman Velasco (son of a former Mexican president) and his son Miguel Aleman Magnani.