Analysis of data provided by US airlines for the first half of 2011 shows that of the four remaining major/legacy carriers offering global networks, three have reported a reduction in domestic demand (as measured by RPMs – Revenue Passenger Miles), while all four have reported an increase in international demand.

Splitting international demand into three geographic regions (Atlantic, Latin America and Pacific) reveals that only Atlantic traffic was up for all four carriers, which is slightly false as last April’s volcanic ash cloud had a major impact on this market, artificially raising this year’s growth figures. 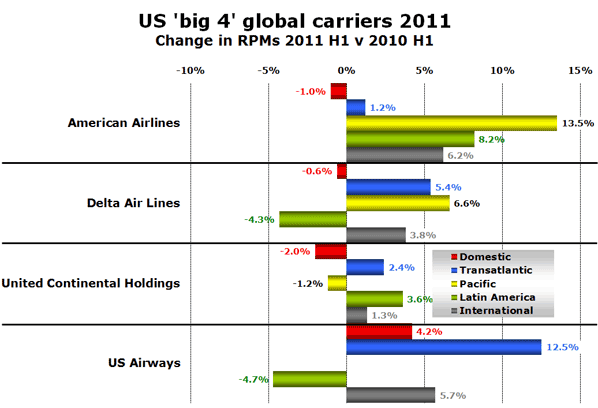 US Airways is the only one of the four to report domestic growth, and is only just beaten by American Airlines when it comes to international growth. The fastest growth in any region is American Airlines in the Pacific where demand is up 13.5%. The only other double-digit growth is US Airways’ 12.5% in Atlantic demand, boosted by the launch in May of new transatlantic services from Charlotte to Dublin and Madrid.

Only United/Continental (the biggest) not expanding

Analysis of total network demand (RPMs) for 10 of the country’s biggest airlines in the first half of this year shows that just one carrier, United Continental Holdings, has not reported an increase in network demand. Given that the carrier is still in the relatively early stages of rationalising its two networks, it is no great surprise that the airline (the biggest in the US by this measure) is shrinking (but by just half of a percent). 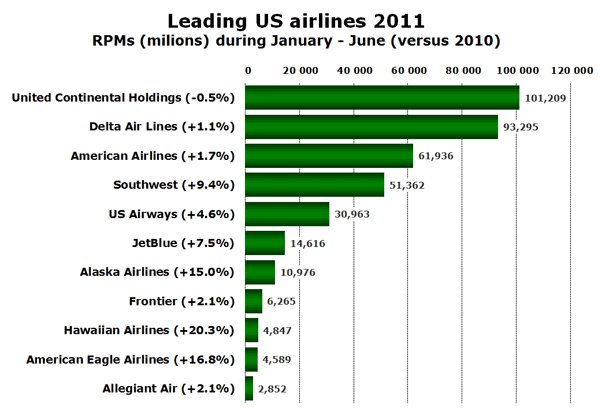 With fuel prices continuing to concern all airlines, there are indications that domestic capacity (which accounts for around 60% of total demand at the country’s three biggest airlines) may continue to shrink during the rest of the year.

Just last week, Delta confirmed that it would be cutting capacity by 4% this autumn/fall and indicated that in addition, it would be adjusting flying in 24 small markets, partly as a result of the decision to retire the airline’s fleet of small Saab turboprops. The airline revealed that flights at one airport (Thief River Falls in Minnesota) have an average load factor of just 12%. Given the use of 34-seat aircraft, that suggests an average of just four passengers per flight. 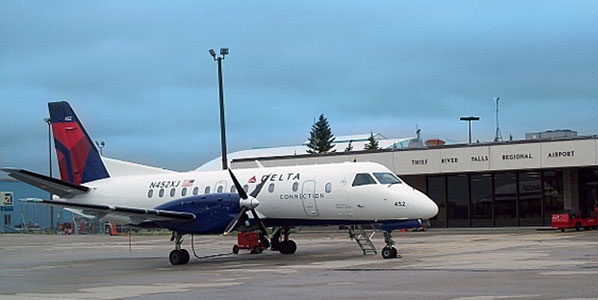 According to Delta, an average of just four passengers per flight use the airline's Saab 340 services (operated by Mesaba) from Thief River Falls Airport in Minnesota to Minneapolis/St Paul. These flights are subsidised by the national Essential Air Services (EAS) programme.

Unlike the ‘big 4’, none of whom reported growth of more than 5%, growth rates at the country’s other airlines has been more impressive year-on-year. The country’s two biggest low-cost/value airlines (Southwest and jetBlue) reported demand growth of 9.4% and 7.5% respectively, while niche carriers Alaska Airlines (+15.0%) and Hawaiian Airlines (+20.3%) are growing well above the national average.