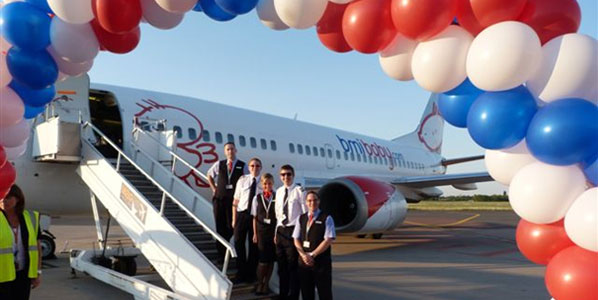 One of the fastest-growing French airports is Montpellier, which at the beginning of this month welcomed a new airline; bmibaby from Manchester.

Data for the first half of 2011 shows that the majority of major French airports have reported passenger growth of at least 6%, with six of them achieving double-digit growth (helped by the boost in April figures after last year’s ash cloud saga). The star performer is Paris Beauvais Airport, which has seen passenger numbers surge by more than 30% between January and June compared with the same period last year thanks to the addition of at least 15 new Ryanair routes and a couple from Wizz Air. 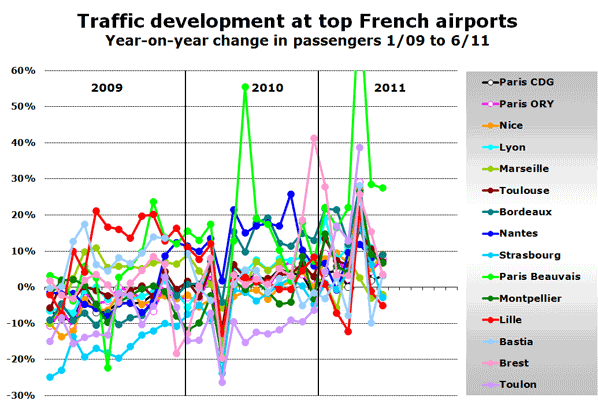 Bordeaux, Brest, Lyon, Nice and Montpellier have also all reported double-digit growth in the first half of 2011 with Paris Orly and Toulouse missing out by the narrowest of margins (both grew by 9.9%). On 22 April, Spanish LCC Vueling started its base at Toulouse with the launch of eight new routes, of which five were to Spanish destinations.

The only two major airports to show a fall in passenger numbers are Marseille where traffic is down 1.6%, and Lille (down 0.6%). Marseille will likely continue to report modest traffic declines during the rest of the summer after Ryanair’s decision to remove permanently based aircraft from the airport. However, from October the airport will benefit from 13 new routes operated by Air France.

Analysis of the performance of the top 15 regional domestic routes in France (those not involving Paris) during the first half of 2011 reveals that 11 of them reported growth of between 0.5% and 16.4%, one (Marseille – Bordeaux) was down by less than 2%, while the remaining three showed significant changes. 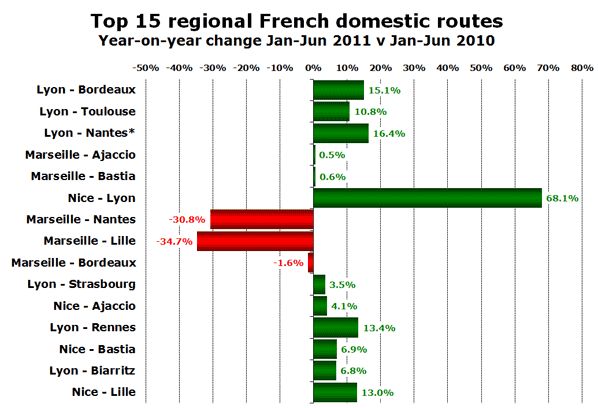 The decision by easyJet last November to start operating between its base at Lyon and Nice, a route that was previously an Air France monopoly, has seen traffic stimulated by almost 70% in the first six months of 2011. Another domestic route to see low-cost competition is Toulouse – Nice, which Vueling began operating at the end of April. In the first quarter of 2011, passenger numbers on the route were down just under 1%, but with Air France now facing competition from the Spanish LCC, passenger numbers were up 40% in May and 31% in June.

Conversely, passenger numbers between Marseille and Nantes, and Marseille and Lille are down between 30% and 35% after Ryanair pulled off both routes, before re-starting the routes with reduced capacity during the peak summer period.