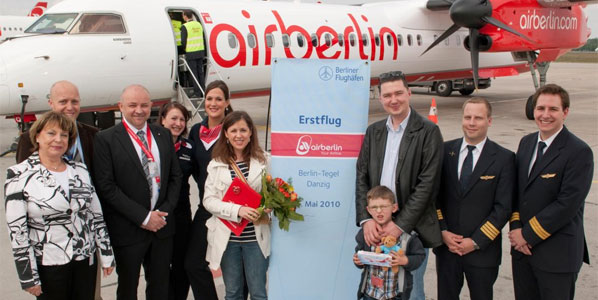 At anna.aero, we would much prefer to see the success of brave, historically important new services, such as airberlin’s Berlin-Tegel to Gdansk route. Launched only a year ago, this city pair is no longer served again, despite poor road and rail links meaning a 500km/6-hour overland journey. (Photo: Günter Wicker/Berlin Airports)

Germany’s second biggest airline (and future oneworld member), airberlin now operates an extremely mixed fleet of almost 150 aircraft ranging from 76-seat Q400s to 387-seat A330-300s. This gives it the flexibility to operate a wide variety of routes from long-haul flights to Bangkok and New York, to short domestic routes such as those to the island of Sylt.

With significant profitability still proving somewhat elusive, the airline has been busy refining its network, especially in light of the introduction of ‘eco-taxes’ in Germany and Austria. Analysis undertaken by anna.aero on OAG schedule data for August 2010 and August 2011 has identified 34 routes which were operated last summer with at least two weekly flights and that are no longer served this summer.

The introduction of the Austrian departure tax appears to have put paid to the domestic route between Vienna and Innsbruck, which partner niki began operating in November 2008. The decision to axe the double-daily German domestic route between Berlin Tegel and Memmingen at the end of last October means that airberlin no longer serves the Bavarian airport. This is a route that has been operated from Memmingen since the airport opened four summers ago, initially by TUIfly.com, but then taken over by airberlin at the start of the winter 2009 season.

Over 40 new routes started during the same period

It should be noted that during the same period, airberlin has started over 40 new routes, notably at least 10 routes from both Berlin Tegel and Düsseldorf. New routes to Italy account for around a quarter of all the frequencies associated with the new routes, while the highest profile new route was the Berlin Tegel to New York JFK service, which launched at the beginning of May with four weekly flights.