Frontier now #8 US domestic airline with 2% of market; over 100 routes including over 60 from main Denver base Despite the premium quality shown here, none of these fine baked items has won the anna.aero Cake of the Week – the first two cakes are for Denver to  Louisville KY and Branson MO  in April 2010, although the third cake, for  Oklahoma City to Tampa FL , was for a service which did win Route of the Week in Jaunary 2010.

According to OAG schedule data for July, Frontier Airlines accounts for just under 2% of US domestic seat capacity. This ranks it eighth in the country after the four remaining international legacy carriers, Southwest (including AirTran), Alaska Airlines and jetBlue, but ahead of Hawaiian, Spirit, Allegiant and Virgin America. After Republic Airways Holdings acquired both Frontier and Midwest in 2009, the two airlines were merged under the Frontier brand last summer.

In the first half of this year the airline carried 7.16 million passengers (up 1%) at an average load factor of 83% on a fleet of around 100 aircraft, comprising over 50 narrowbody Airbus and 32 Embraer E-jets (E170/E190), as well 12 smaller Embraer jets (E135s/E145s) and four Q400s operated by the airline’s regional partner as Frontier Express.

The combined airline has three main bases at Denver, Milwaukee and Kansas City although it faces significant competition at all three, notably its biggest base at Denver where United has been established for many years, and Southwest who have made the airport their fifth biggest and fastest-growing base.

Nearly all of Frontier’s over 100 routes involve at least one of these three airports, the exceptions being three routes from Omaha (to Los Angeles, San Diego and Washington) and a niche route between Rhinelander, Wisconsin and Ironwood, Michigan, though the route is actually an extension of a Milwaukee-Rhinelander service. 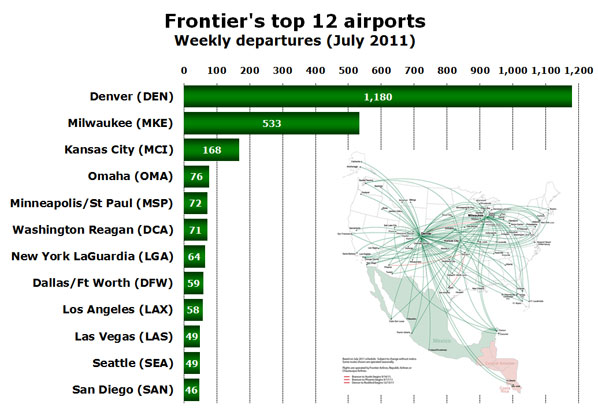 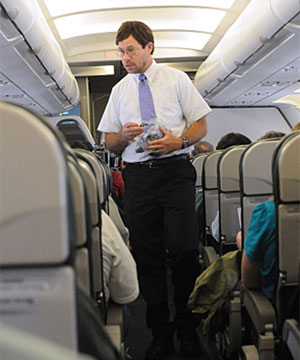 The airline’s network of over 70 airports includes both coasts as well as international services to Costa Rica and Mexico, but not the Caribbean or Canada.

Over 40 new routes in the last 18 months

Frontier/Midwest has launched over 40 new routes since the beginning of 2010, though some only operate on a seasonal basis. Denver has seem the addition of almost 20 new routes while Milwaukee has benefited from 10 new routes and Kansas City six. However, the airline recently confirmed that from mid-September flights from Milwaukee to Appleton, Hartford and Louisville (all operated by Republic subsidiary Chautauqua Airlines’s E135s) would cease.

However, at the same time the airline will be starting two new routes from Branson (Missouri) to Austin (Texas) and Phoenix (Arizona), followed in mid-December by a new route from Denver to Rockford (Illinois), around 110 kilometres northwest of Chicago. Frontier does not currently serve Chicago’s main O’Hare airport although it does offer five daily flights from Denver to Chicago’s Midway airport.