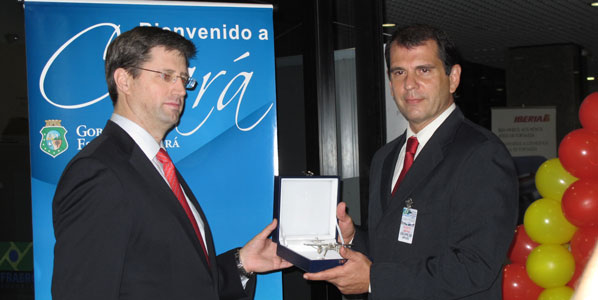 February: Iberia arrives in the Brazilian city of Fortaleza (with a 90% load factor) where the airline’s international sales director Ángel Valdemoros was presented with a gift by Carlo Ferrentini, tourism state secretary of Ceará. In 2010, the Spanish airline carried 492,000 passengers between Europe and Brazil, nearly 7% more than in the previous year. Unlike its new International Airline Group (IAG) partner British Airways, Iberia has increased demand by concentrating on long-haul markets.

Last year Iberia’s passenger numbers fell by just under 4% to 19.6 million, its lowest figure in a decade. However, unlike its new International Airline Group (IAG) partner British Airways, it has increased demand (as measured by RPKs – revenue passenger kilometres) between 1999 and 2007 by concentrating more on growth in longer-haul markets.

A comparison of annual RPKs since 1999 shows that Iberia’s growth has echoed more closely that of Air France and Lufthansa, rather than British Airways, despite increased competition in the short-haul market and handing over much of its operations at Barcelona to clickair, which then merged with Vueling to create the new Vueling in which Iberia has a significant stake. 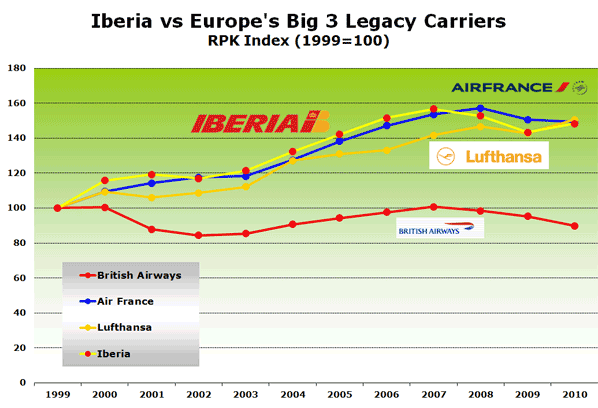 Madrid ASKs over 20 times bigger than at Barcelona

If measured by ASKs (Available Seat Kilometres), which is a better approximation to revenue than simply seat capacity, Iberia’s Madrid capacity is over 20 times bigger than at Barcelona. In fact Barcelona ranks only eighth among Iberia’s airports in terms of departing ASKs, behind Madrid, five airports in Latin America and New York JFK. However, in terms of non-stop destinations served Madrid has 107 (curiously the same number as British Airways has from Heathrow), while Barcelona has 23, of which just 10 are international. Over half of Iberia’s flights from Barcelona are to Madrid, which remains a major market despite the impact of the Ave high-speed rail connections between the two cities. Iberia launched its second route to Miami in March, this time from Barcelona, the first non-stop between the two airports. Iberia expects to carry 53,000 on the service in the first year; one-third connecting passengers 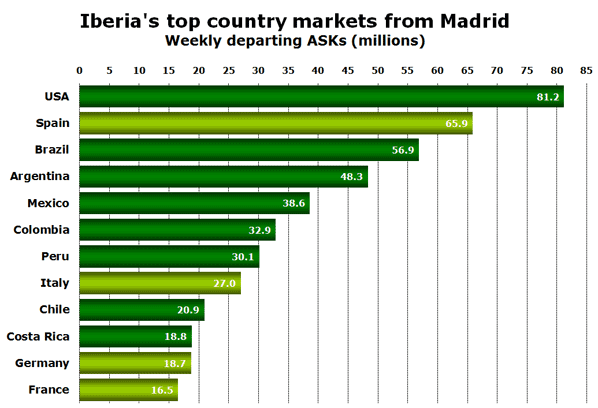 Looking at a route level Buenos Aires leads the way thanks to Iberia’s double-daily flights on the 10,082 kilometre sector. In fact, eight of the top 10 routes are in Latin America with New York JFK and Miami being the only exceptions. 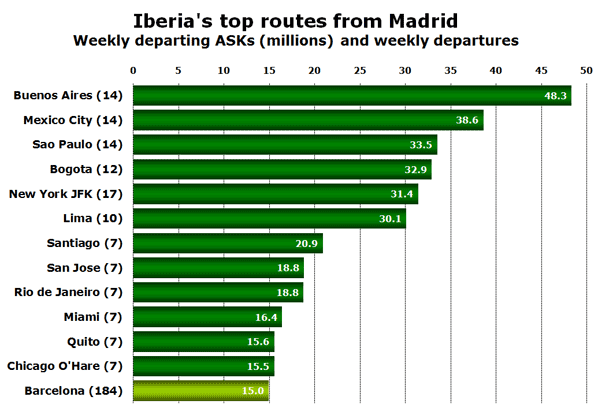 Despite over 180 weekly departures the relatively short distance between the two cities (and the use of smaller aircraft) means that Barcelona ranks just 13th in terms of ASKs from Madrid.

Since the beginning of 2010 Iberia has launched seven new routes from Madrid, none of which are to destinations in mainland Europe. In the Middle East new flights to Amman (Jordan) and Damascus (Syria) have been added, while in North Africa there are new services to Oran (Algeria) and Rabat (Morocco). Latin America has benefited from new services to Cordoba (Argentina) and Fortaleza via Recife (both in Brazil), while in North America a new thrice-weekly service to Los Angeles started at the end of March.

At the end of September there will be a new twice-weekly service to Luanda (Angola) while on 1 November the airline will start two weekly flights to Glasgow using Air Nostrum’s CRJ200. Other non-Madrid routes that have started in the last 18 months include Barcelona to Miami and Sao Paulo, Bilbao to Rome, San Sebastian to Brussels and Vigo to Brussels.