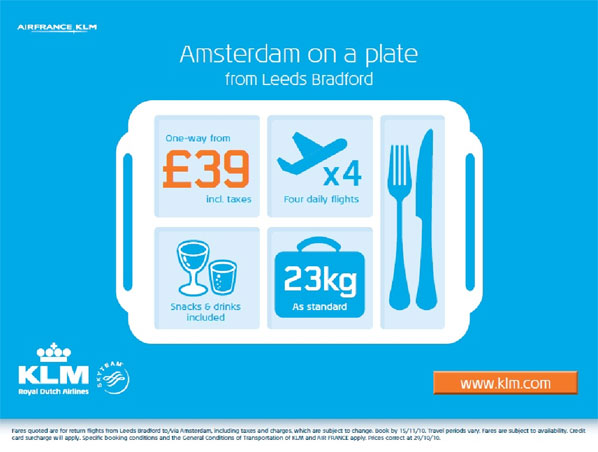 KLM has recently launched a new advertising campaign aimed at generating more passengers from UK regional airports by highlighting what is included in the airline's one-way fares. KLM serves Amsterdam from 13 UK regional airports plus London Heathrow (and London City with Air France).

KLM recently launched an advertising campaign, starting in Leeds/Bradford, aimed at stimulating more traffic from UK regional airports to its Amsterdam hub by highlighting what is included in the airline’s one-way fares. KLM flies from 13 UK regional airports to Amsterdam with each route operated with a minimum of three daily flights. Many of the UK regional airports served by KLM do not have connections to London Heathrow thus providing many regional travellers with their only convenient way of accessing global destinations on a single airline.

Passenger numbers between the UK and Amsterdam peaked in 2007 at just under eight million, but have fallen by 17% to just over 6.5 million in 2010. Traffic from London airports peaked in 2000 at 3.63 million and accounted for 55% of traffic between the UK and Amsterdam. Just six years later London’s share of traffic had fallen to just 43% as regional airports saw a growth in services, especially from low-cost carriers. 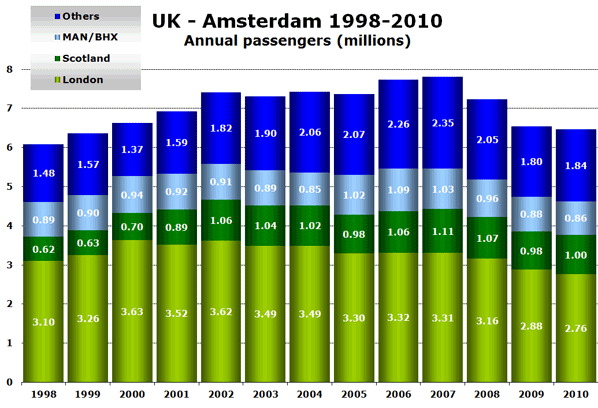 This summer seven airlines are offering non-stop flights from a total of 22 UK airports; five in London and 17 others. In terms of overall seat capacity KLM has an impressive 48%, double that of nearest rival easyJet with 24%. British Airways trails in third with just over 15% of the total market though it does have 37% of the London market, which is the only one it serves.

In September Flybe begins non-stop flights from Inverness to Amsterdam with six weekly flights on a Q400, while Doncaster/Sheffield will get daily flights from mid-September from a new airline called HiAir which will serve the market with a Jetstream 31. At the start of the winter season bmibaby will start daily flights from Belfast City, while at the same time easyJet will resume daily services from Glasgow. easyJet’s new Southend base also includes a double-daily Amsterdam service which will begin next April. 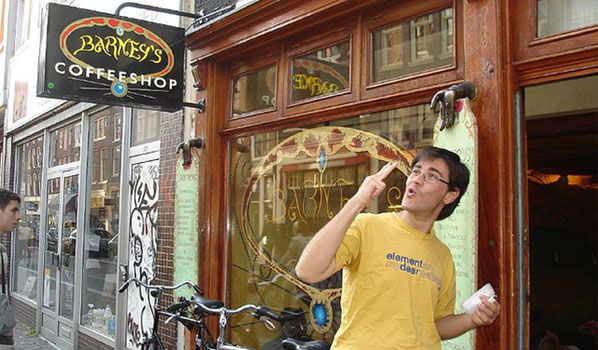 KLM’s adverts clearly appeal to business travellers at a time when the government is planning to impose a ban on non-Dutch nationals using its famous brown cafes where the sale and use of marijuana has been decriminalised. Cafe owners, such as Barney’s, are very concerned about this “irresponsible move”, dubbing it “the death of tourism.” While this (apparently confused) visitor to Barney’s is clearly influenced by this unique retail opportunity, actual figures on the true impact on tourism are hard to come by – varying by 20-40% among leisure travellers – but are probably quite significant.