Latin America is a vital place for new routes and it’s little surprise that growth is led by Brazil – the “B” of the “BRIC” countries of Brazil, Russia, India and China, the key economies of the developing world to which global economic power is being re-distributed.

According to ALTA, the Latin American and Caribbean Air Transport Association (whose members account for an estimated 90% of traffic in the region), passenger numbers of their member airlines increased by 11.3% in 2010, as did traffic (RPKs), while capacity (ASKs) increased by a more modest 6.4%. At the same time, the average load factor climbed by more than three percentage points to 73.3%.

Growth continued in the first five months of 2011, albeit at a cooler rate, with passenger numbers up +5.4%, traffic (RPKs) up +7.2% and capacity (ASKs) up 2.1%. The slower capacity growth delivered better load factors, which climbed almost four percentage points to 75.2%. A closer look at the passenger figures reveals that domestic travel is up 7.8%, intra-regional international traffic is up 5.9%, but international traffic outside the region (primarily to the US) is down 10.2%, influenced significantly by the demise of Mexicana last August.

Brazil has seven of top 10 airports

Given its geographical dominance, it will come as little surprise that seven of the top 10 airports (as measured by weekly departing seat capacity) are in Brazil, with Mexico City sandwiched between Sao Paulo’s two airports at Guarulhos and Congonhas. 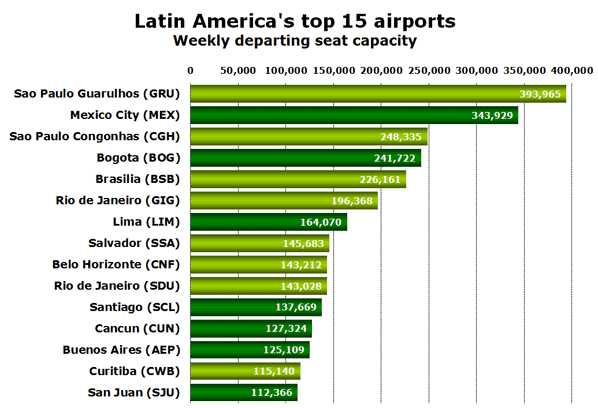 Rio de Janeiro also has two airports in the top 10, while Brazil’s capital, Brasilia, ranks fifth. Apart from Mexico City, the leading non-Brazilian airports are Bogota in Colombia and Lima in Peru. Almost 500 airports in the region are recognised as having scheduled air services

In terms of weekly seat capacity operated by airlines from airports in the region, there is little to choose between Gol/Varig and TAM. While Gol/Varig recently announced plans to acquire Webjet (ranked 11th), rival TAM is looking to purchase a significant share of Trip (ranked 12th). Brazil’s third-biggest airline, Azul, already ranks seventh in the region. 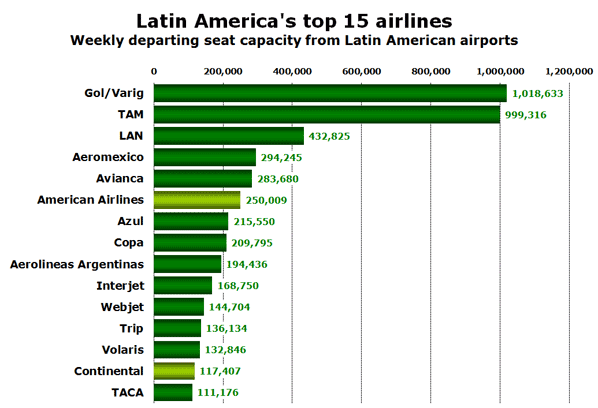 Two carriers from outside of the region make the top 15. American Airlines and Continental (both highlighted in pale green) are major players, although American’s capacity is down 8% year-on-year, partly as a result of downsizing its San Juan hub in Puerto Rico. Continental operates over 100 routes from US airports (primarily its Newark and Houston bases), including 40 to Mexico alone.

Airlines in the region are looking to consolidate, with Avianca and TACA having already merged and TAM and LAN still waiting for approval for their merger. The number of carriers in the Mexican domestic market has fallen dramatically in recent years, while Brazil’s ‘big 2’ seem to be keen on acquiring some of their smaller rivals.

Mexican domestic market only 25% as big as Brazil’s

The leading international country-pair involving the region is between Mexico and the US. This is followed by Puerto Rico-US (although in many cases treated as a domestic country-pair), Dominican Republic-US, Brazil-US and Argentina-Brazil.