Last week, Air Macau expanded its network to Mainland China with a new service to Taiyuan and services to Chongqing are next, launching later this week. With direct flights between Taiwan and Mainland China now possible, Macau’s role as a transfer airport has decreased. Instead, the booming air travel market in Mainland China is where the Special Administrative Region’s airport is getting more and more of its capacity.

Like its larger neighbour Hong Kong, Macau on the southern coast of China was the colony of a European power until the Portuguese handed the island and peninsula back to China in 1999. A few years before, in 1995, Macau International Airport (MFM) had been built, largely on reclaimed land, providing the ‘Las Vegas of Asia’ with another source of income. 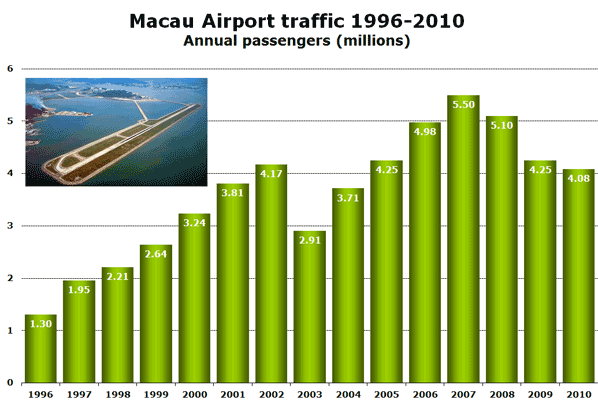 In the first few years of operation, the airport grew rapidly; however, the 2003 SARS epidemic caused that year’s passenger numbers to fall by over 30% on the previous year. As the airport’s traffic recovered, it peaked in 2007 at 5.5 million passengers (which can be put in relation to Macau’s 0.5 million inhabitants), and it has still not recovered from the subsequent decline. The global financial crisis plays a part, along with the locally based low-cost carrier Viva Macau suspending operations in March last year. However, a key factor is the liberalisation of non-stop services between Mainland China and Taiwan, which previously was traffic that required a transfer, often in Macau or Hong Kong.

This year, passenger numbers started off with a further decline compared with last year (-9.8% January-May), but figures for June show growth; +5.0% over June 2010. The airport also forecasts further growth for July and August; a notable recovery for the airport that lost a local carrier last year. 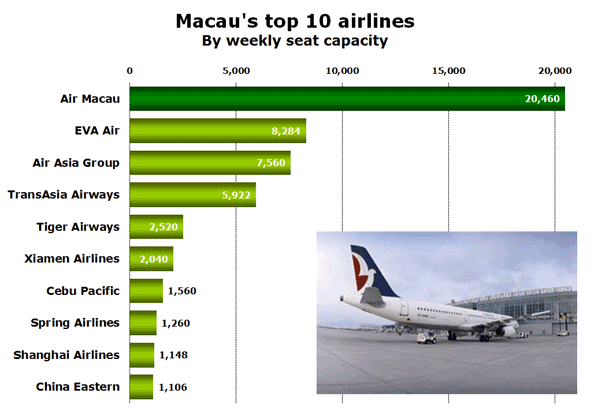 The local flag carrier Air Macau, which currently has a 37% share of the airport’s total seat capacity, has increased by 7% on last year.

AirAsia was the first low-cost airline to discover Macau as a low-cost alternative to Hong Kong, having first launched flights to Macau in 2004. In 2009, the airline operated six routes to airport; from Bangkok in Thailand and from five Malaysian airports. That year, which also was the height of Viva Macau, low-cost capacity made out 30% at the airport. This year, that figure has shrunk to 25%. AirAsia now only operates two routes to Macau, from Kuala Lumpur and Bangkok, as the airline has moved part of its operations over to Hong Kong. The airline’s year-on-year seat capacity reduction is 19%.

Tiger Airways has, however, doubled its capacity at the airport in the last year as a result of the airline’s partnership with SEAIR of the Philippines, which entered the Macau market with a daily flight from Clark at the end of May this year. Meanwhile, Jetstar Asia, which is a low-cost competitor on the Singapore route, last year ranked eighth in Macau, but has this year fallen off the list due to its reduction from daily to three flights a week.

Taiwanese airlines, which – as already pointed out – now have greater access directly to Mainland China, are also reducing in Macau. EVA Air and TransAsia have shrunk their capacity at the airport by 17% and 20% respectively. Instead, growth comes from Mainland China’s fast-growing airlines. Spring Airlines is new in the market with its daily flights from Shanghai Pudong, which were launched in April this year, and Xiamen Airlines has added two more routes in the last year; Jinjiang last November and Fuzhou in April.

Although China Eastern is a new entrant to Macau in the last year, this is an effect of the airline’s merger with Shanghai Airlines. The two airlines’ combined capacity to Macau is almost unchanged from that of Shanghai Airlines last July.

Dramatic changes to network in the last year 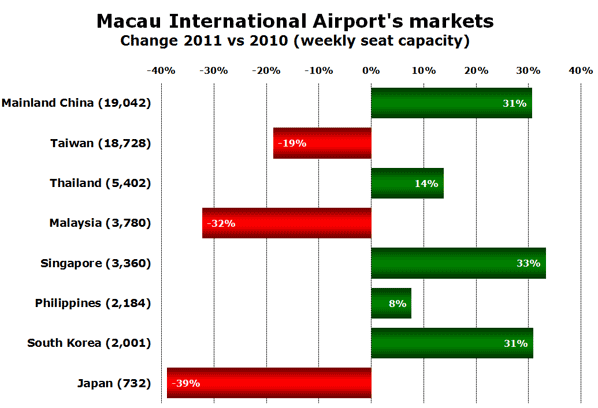 In line with the growth of airlines from Mainland China, this market – which this year has passed Taiwan as Macau’s biggest – is growing fast. In addition to airlines based at the other end of the route, Air Macau alone has decreased Taiwanese capacity by 23% and grown by 11% in Mainland China. Last week, Air Macau launched two weekly flights to Taiyuan in northern China and later this week, Chongqing in the southwest of the country is next with three flights a week.

However, the smaller markets Singapore and South Korea are also growing at the same speed. The low-cost airline Jin Air launched flights from Seoul Incheon in November last year and Air Macau launched a route to Singapore in January.

The Malaysian decline is the result of AirAsia’s partial move to Hong Kong, while the Japanese capacity drop – albeit from a low level – is due to a decline in demand following the Fukushima nuclear incident earlier this year. Air Macau is the only airline serving the country market, operating to both Osaka Kansai and Tokyo Narita. 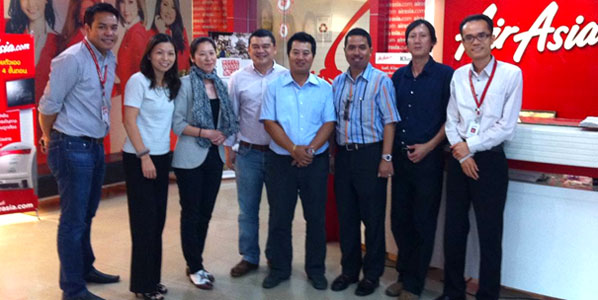