The latest new airline to serve Domodedovo is Ukraine International, which last week began flying thrice-daily from Kiev Borispol. The Ukrainian state carrier is one of seven new airlines to have begun serving the Moscow airport in the last year, and later this year, SriLankan Airlines and Oman Air will be next.

Of the three airports serving the megacity of Moscow, which dominates Russia’s fast-growing air travel industry, Domodedovo Airport southwest of the city is the largest. In 2010, the privately owned airport had a passenger throughput of 22.3 million; 16% higher than Sheremetyevo Airport – the home to the national carrier Aeroflot – located to the north of the city, and well over twice that of Vnukovo Airport in the southwest of the city. 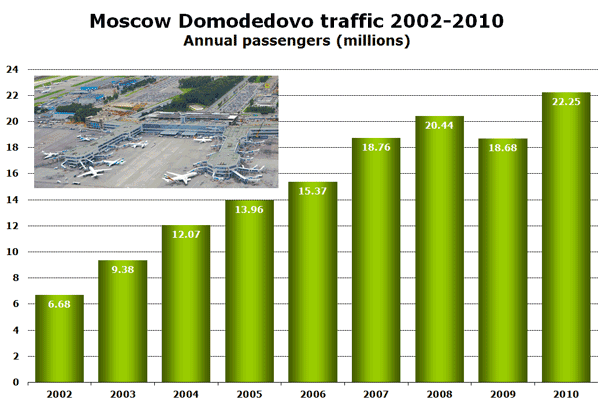 The passenger development at Domodedovo in the last decade has been characterised by rapid growth. Only one year did numbers decline, in the wake of the global financial downturn in 2009; however, the 8.6% fall was quickly recovered and the airport again reported record figures for 2010. On average between 2002 and 2010, the annual passenger growth at the airport has been 17%. This trend is continuing. For the first half of 2011, Domodedovo Airport reports passenger growth of 15%. 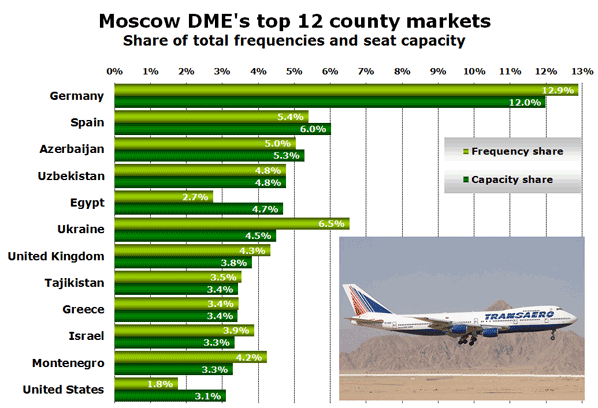 Domodedovo’s top 12 international markets reveal an exotic mix of countries, ranging from CIS countries in the east to the US in the west. The German market, which is by far the largest – twice as big as the capacity allocated to services to Spain, benefits from a relatively liberal air service agreement with Russia, which in many other countries’ cases tend to be more restrictive. Domodedovo is currently connected with seven German airports on four airlines; Lufthansa, airberlin, S7 and Transaero.

Now in July, a selection of the top markets are particularly popular with the outbound market as seasonal leisure destinations; for example Spain, Greece and Montenegro. Egypt is helped to the top list through locally based Transaero’s usage of high-capacity 747 aircraft, which is revealed in the country market’s much higher share of capacity than frequencies, while traffic to Russia’s neighbour country Ukraine logically shows a much higher share of frequencies.

Flights to the US just make the top 12, since Domodedovo offers four routes; Singapore Airlines’ daily service between Singapore and Houston Intercontinental is operated via Moscow, while United flies daily to Domodedovo from Washington Dulles. Transaero launched US operations in the last year, having begun serving both Miami and New York JFK last October. 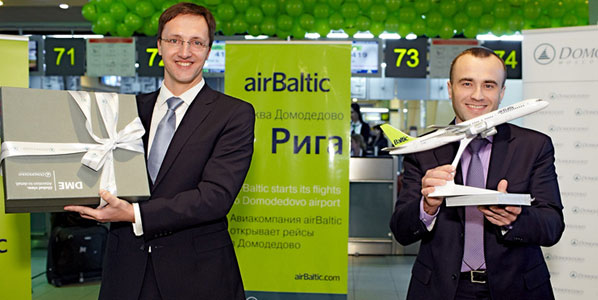 airBaltic began serving Moscow Domodedovo in December last year, complementing its flights to Sheremetyevo. Because of the size of Moscow, the three airports serving the city have somewhat different catchment areas.

Domodedovo is home to the local airlines S7 and Transaero, whose shares of the airport’s seat capacity is 25% and 21% respectively. It is also the designated airport for the two airline alliances oneworld, of which S7 is a member, and Star Alliance; although some of the alliances’ member airlines still choose to serve Sheremetyevo.

Other airlines notable for their size at Domodedovo are VIM Airlines, which has a 7.6% share of seat capacity, and Ural Airlines at 5.9%. Lufthansa is the largest foreign airline with a 3.8% share. All other airlines have shares less than 2% of total seat capacity.

Announced routes yet to be launched later this year are SriLankan Airlines’ twice-weekly service operating from Colombo via Dubai, which will launch on 15 September, and Oman Air’s also twice-weekly flights from Muscat, which are due to start on 16 November.