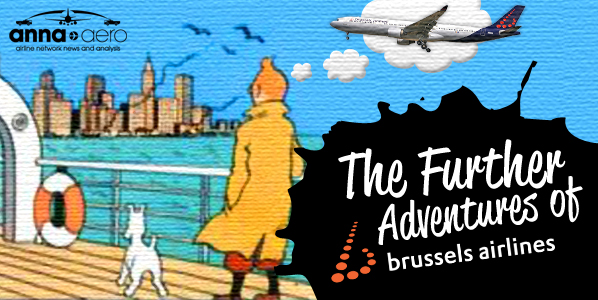 Eight of the top 15 country markets served by Brussels Airlines are in Africa, although the 45% Lufthansa-owned Star Alliance member is thought to be considering a US route in 2012 when it takes delivery of a sixth A330.

Since SN Brussels Airlines merged with Virgin Express in early 2007 to create Brussels Airlines, the Belgian flag-carrier has carried around five million passengers annually on its European and African focused network. Nearly half of its fleet of around 50 aircraft still consists of later versions of the four-engined BAe 146, which given the current cost of fuel must be a source of some concern for the airline. In addition, the carrier also operates 10 narrow-body Airbus aircraft, and eight 737s as well as five wide-bodied A330s.

According to OAG data for July, the airline serves 59 destinations non-stop from Brussels as well as serving several African destinations either via another airport, or as part of a triangle route. In terms of capacity as measured by ASKs (Available Seat Kilometres), 77% is allocated to European services, and 21% to African services, with a daily service to Tel Aviv accounting for the rest. The airline does not operate any scheduled services at present to any destinations in the Americas or Asia. 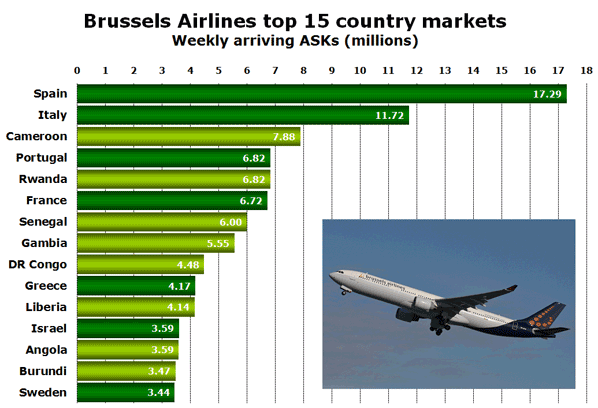 On a country basis, eight of the top 15 country markets served by Brussels Airlines are in Africa, although the biggest (Cameroon – Douala and Yaoundé are both served) ranks third, well behind Spain and Italy. Just outside the top 15 are relatively nearby Germany (16th) and the UK (17th), even though these markets are served with 57 weekly flights (to three destinations) and 87 weekly flights (to six destinations) respectively.

Brussels Airlines’ leading country market is Spain where the carrier serves six destinations; Barcelona (27 departures per week), Malaga (25), Madrid (20), Bilbao (18), Seville (4) and Palma de Mallorca (3), making a total of 97 weekly departures. In Italy 10 destinations are served with a total of 109 weekly departures, led by Rome Fiumicino (26 departures per week) and Milan Malpensa (25). The Italian network includes Lamezia Terme, one of three new routes added so far in 2011, the others being Agadir and Marrakech in Morocco.

New routes started since the beginning of 2010 are:

The upcoming new service to Bamako in Mali will be the airline’s 21st destination in Africa.

Brussels Airlines to start own US flights in 2012?

The airline’s on-line timetable highlights that it offers direct flights to Chicago, New York, Philadelphia and Washington, but these are codeshare flights with its fellow Star Alliance members Continental (to Newark), United (to Chicago and Washington) and US Airways (to Philadelphia). Brussels Airlines, which is currently 45% owned by Lufthansa, became a Star Alliance member at the end of 2009. The airline is rumoured to be considering a US route of its own next year when it takes delivery of a sixth A330.