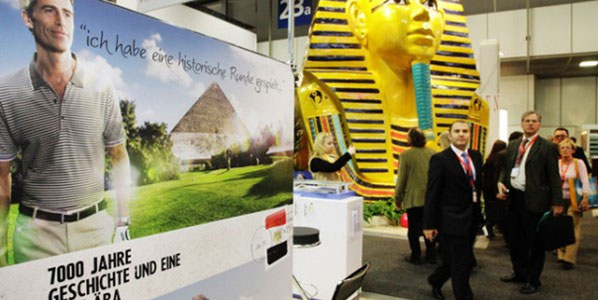 The topical slogan from the Egyptian Pavilion at ITB Berlin 2011 says “7,000 years of history and a new era...” Seat capacity to Egypt is down by almost half from Germany, although who really believes that value and sun-loving Germans can stay away from Egypt for too long?

Since anna.aero last analysed the Egyptian market in February last year, the country’s airports experienced another record year in 2010. Passenger numbers grew by 15% to a total of 40.2 million passengers.

This year, developments have taken a different turn. Although passenger numbers in January were up by 9.5%, the uprising that began at the end of that month and escalated into a revolution had an adverse effect on the country’s air transport industry. 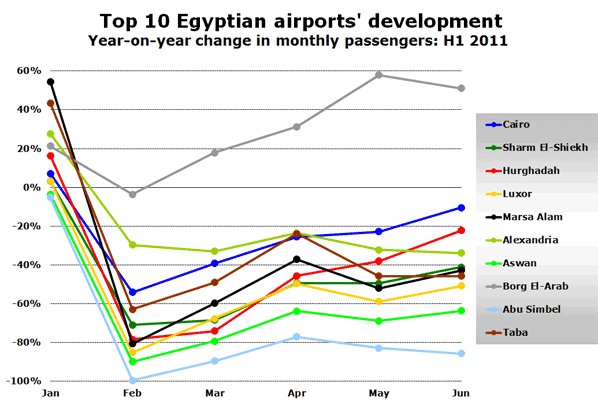 In February, passenger numbers fell by 65.5% across Egypt’s airports, however, as the country shows stability under its new regime, passengers are returning to the market. The latest figures for June 2011 are still down by 22.8% and the recovery at the country’s biggest airport – Cairo, which stands for 43% of total passenger numbers – has been constant.

The exception to the rule has been Alexandria’s Borg El Arab Airport, which reopened in 2010 after modernisation works and became the country’s seventh-largest airport by passenger throughput by the end of the year. After a small dip into the red in February, the airport has reported strong positive growth for the rest of the first half of 2011. The airport can be expected to continue to grow as flights currently serving the busier Alexandria International (El Nouzha) will move over to Borg El Arab during renovation and expansion works at the former airport. 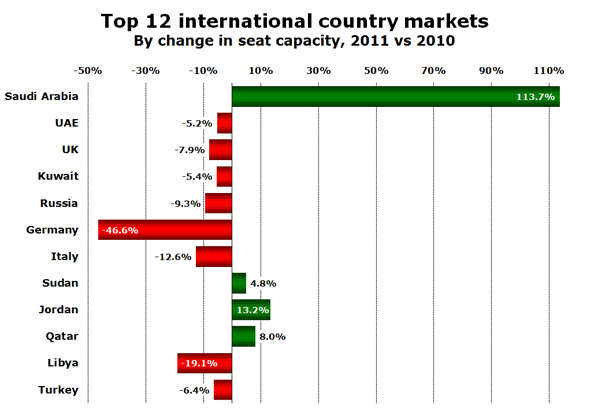 In spite of already being by far the biggest international country market from Egypt, Saudi Arabia’s seat capacity beats the trend and has more than doubled in the last year. The Egypt-Saudi market is now more than five times the size of Egypt’s second-largest international market, the United Arab Emirates. Contributors to this growth are, for example, nasair and Air Arabia Egypt. The former expanded its Egyptian network in January when it launched flights from both Riyadh and Dammam to Sohag, the new airport opened last year, initially bearing the name of now ousted president Hosni Mubarak. Air Arabia Egypt as recently as June began serving the same two Saudi airports from its base at Alexandria’s Borg El Arab Airport.

At the other end of the spectrum, the German market sticks out for almost having had its capacity halved. Leisure airlines like TUIfly and Condor this month serve Egypt with 40-45% of the seat capacity they offered last August and even Lufthansa has halved capacity on its Frankfurt route to Cairo. 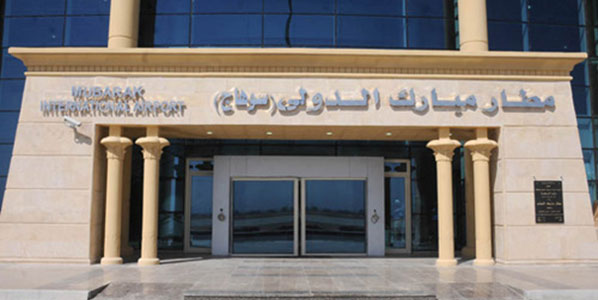 Here’s an idea: Don’t name your airport after living people. The brand-new Mubarak International Airport is now plain old “Sohag” again. The Saudi Arabian low-cost carrier nasair launched flights from both Riyadh and Dammam to Sohag in January – adding to an effect which has seen Egypt-Saudi seat capacity more than double in the past year.

With 38% of international seat capacity, EgyptAir is – not surprisingly – the dominant airline to and from Egypt. However, Saudi Arabian Airlines is not far behind with its 22% share. The share of the third-largest airline, Russia’s Transaero, is barely 4%.

While several European flag carriers have downsized their presence in the Egyptian market, others have had a more positive outlook on the opportunities in the changing country market and have grown. Apart from already mentioned Lufthansa, Air France (-30%), British Airways (-49%), Swiss (-26%) and KLM (-48%) are all drastically down on the capacity offered last August. Meanwhile, EgyptAir has increased by 12% and Saudi Arabian Airlines by 85%. Transaero (+13%) and Ural Airlines (+20%) of Russia also see further potential in the Egyptian market.

Plans for new airlines to enter the Egyptian market have also been shelved due to the recent turmoil. United/Continental intended to connect its Newark hub with the Cairo hub of its Star Alliance partner EgyptAir in May this year; however, the route was abandoned before it had the time to launch.