International growth encourages: Almost all the top Canadian airports have seen growth in (non-US) international traffic so far in 2011. In June China Southern arrived in Vancouver from Guangzhou where the ribbon was cut by Tan Wan Geng, China Southern's General Manager, and Maxime Bernier, Canadian Foreign Minister (centre). Tan was also presented with his very own Vancouver Canucks ice hockey shirt by the minister.

With six of Canada’s top 10 airports having reported traffic figures for the first six months of 2011 (and the remaining four reporting passenger demand up until May), it is worth taking a look at how the country’s airports are performing so far this year. The top six airports (Toronto, Vancouver, Montreal, Calgary, Edmonton and Ottawa) have all reported growth so far this year, but Winnipeg, Victoria and Kelowna have all seen small declines in year-on-year traffic in the first half of 2011. Only two airports have reported growth of more than 5% this year and they are Toronto (5.6% to May) and Montreal (6.3% to June). 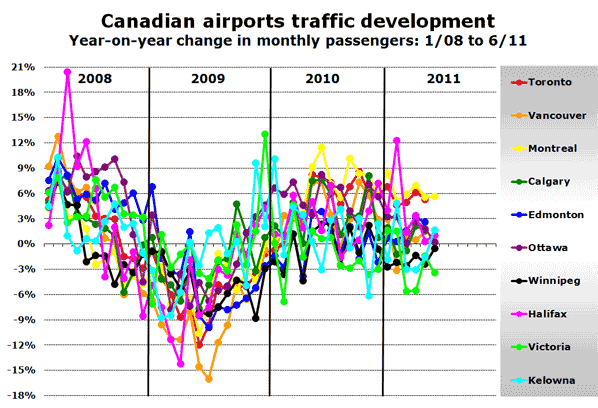 The eight busiest Canadian airports all break down their traffic figures into domestic, transborder (US) and international (non-US). A graph of year-to-date ‘growth’ for each airport by region reveals that the domestic market has seen the least growth in 2011, with three of the top eight airports reporting a small decline in domestic passengers. 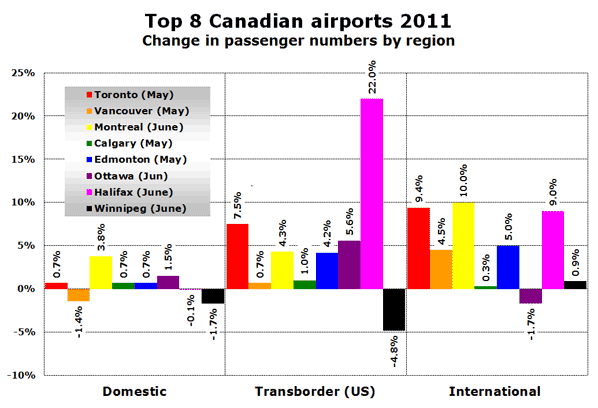 The US market has seen growth at all airports except Winnipeg, with Halifax leading the way (+22%) but Toronto also impressing with growth of 7.5% in this market. All airports except Ottawa have seen growth in (non-US) international traffic so far in 2011, with Halifax, Montreal and Toronto all reporting growth of around 10%. At the end of June, Montreal welcomed Qatar Airways’ new thrice-weekly non-stop flights from Doha, which should further help Montreal’s international traffic to grow.