August 1, 2011: The re-introduction of Delta (SkyWest) services between Oakland and Los Angeles, with five daily flights. Oakland’s Aviation Marketing Manager John Albrecht tells anna.aero: “The plane did leave 100% full – 30 passengers connecting to other Delta services in the US and Mexico and 20 travelling to the ‘local’ SF Bay-LA Basin. A good time was had by all! Delta, through its processor Western Airlines, has been serving the sunnyside of the San Francisco Bay at OAK since 1946. We're thrilled that they have re-commenced the service to LA to compliment their existing service to Salt Lake City.” The happy Delta Air Lines ladies at OAK’s Gate 15 for this first flight are Michelle Niksich, Teresa Schroeder and Jonelle Booze-Johnson.

Oakland Airport, which serves the San Francisco Bay area, is California’s fourth busiest airport, serving over 9.5 million passengers in 2010. However, traffic peaked back in 2007 when over 14 million passengers used the airport. Passenger numbers in the last two years are now back at roughly the same level as they were in the late 1990s. Since 2007, the airport has seen Aloha Airlines, ATA and Mexicana go bust, while American and Continental have withdrawn all their services. All other carriers have also cut capacity at the airport including Southwest, which remains the airport’s leading airline with non-stop services to 19 destinations accounting for around 75% of seat capacity, and making it almost 10 times bigger than the airport’s second busiest carrier, Alaska Airlines. 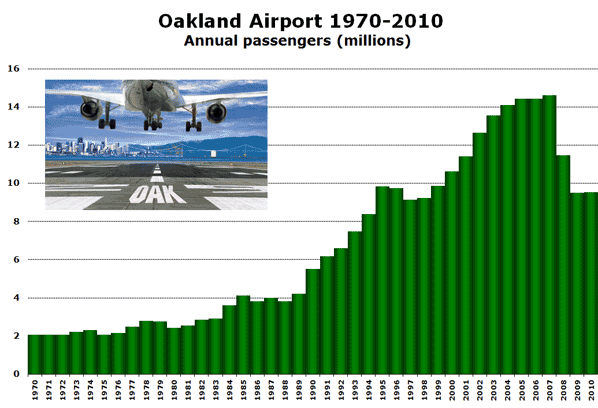 In the first six months of 2011, passenger numbers are down just under 4% to 4.4 million. Traffic typically peaks in June, July and August. 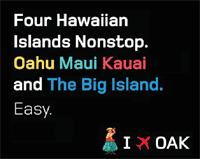 This week has seen the re-introduction of Delta services between Oakland and Los Angeles, with five daily flights, complementing Delta’s only other route at the airport from Salt Lake City. Later this month, Spirit Airlines returns to Oakland with the introduction of three daily flights to Las Vegas, a route on which it will compete with Southwest Airlines.

Volaris compensating for demise of Mexicana

Mexicana’s collapse last August reduced competition in the Mexican market, but fellow Mexican carrier Volaris has compensated by doubling capacity on its Guadalajara service. In May of this year, the carrier also started daily flights from Mexico City.

Thanks to the major presence of Southwest, domestic air fares from Oakland have consistently been well below the national average on a sector-length adjusted basis. In 2008, Oakland passengers paid around 14% less than the national average, rising to around 10% less in 2009. Last year, the average fare premium at Oakland was around minus 8.5%. 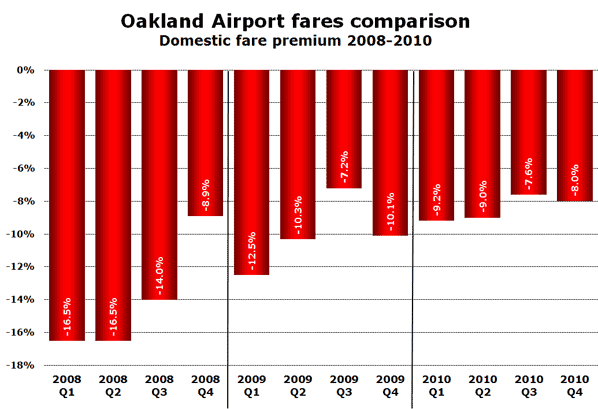