Only two out of 34 European countries report fall in demand in first half of 2011; Estonia leads way with 37% growth

63 million more passengers!! The simple average growth rates for 34 countries is 11.7% – or 9.7% taking into account market size which jumped from 656 million to 719.5 million passengers. While last year’s volcano resulted in some artificially impressive growth figures for April, this will have accounted for a traffic boost of no more than around 3%-4% over the six months.

The anna.aero European Airport Traffic and Trends Database contains information on almost 300 airports and is updated weekly, so our reporting is far more comprehensive than other sources. Our information is also free to see and download without having to register, and spares you the hassle of remembering yet another password.

The good news is that the vast majority of European countries saw passenger numbers across their airports grow by at least 5% in the first half of 2011. While last year’s volcano resulted in some artificially impressive growth figures for April, across a six-month period this will have accounted for a traffic boost of no more than around 3%-4%. Only Slovakia (represented by Bratislava) and Greece (represented by Athens) showed a fall in passenger volumes compared with the first half of 2010. 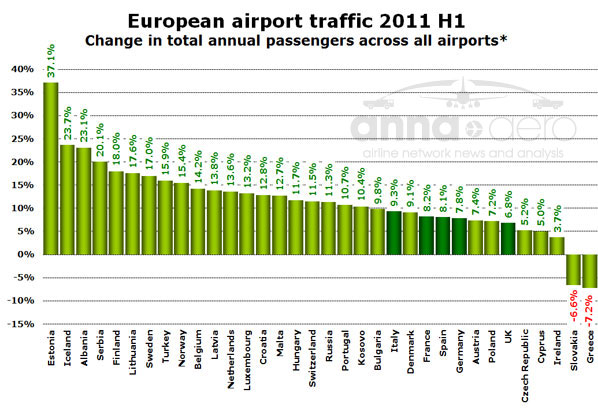 Source: Various *Data for Cyprus, Czech Republic, Italy, Russia and Slovakia is for January - May 2011. For some countries data is only available for the busiest airports.

Europe’s five biggest air travel markets (France, Germany, Italy, Spain and the UK – shown in dark green) all reported growth of between 6.8% and 9.3%. Germany’s 7.8% growth may well have been bigger if the government had not introduced its €8 ‘eco-tax’ at the beginning of the year – research by ADV (the German Airport Association) indicates that this has had a clear impact, especially on the low-cost market.

A simple average of the 34 country growth rates reveals an average of 11.7%, but when taking into account market size the true growth rate is 9.7%, from 656 million passengers to 719.5 million, the result of the larger markets reporting slower growth in percentage terms. These passenger figures should be treated with caution as they do not include June data for some larger markets (like Italy and Russia) and do not include all airports in certain countries listed.

The fastest growth has been reported in the Estonian market (represented by Tallinn Airport) where passenger numbers in the first half of the year are up just over 37%, thanks to the introduction of 10 new routes by Ryanair (five in December and five in the first quarter of 2011), as well as new services by Blue1, easyJet and Estonian Air.

Five of the six fastest-growing country markets are small markets represented by just one or two airports. The fastest-growing major country market is Finland, where Finavia reports passenger numbers up 18%, beating Sweden (up 17%) by one percentage point. The Nordic countries were hit particularly hard by last year’s ash cloud, so their impressive performance so far in 2011 can in part be attributed to that factor. By the end of the year, the ‘ash cloud’ effect will have become further diluted so the country rankings may change considerably.

*Note: Countries not included in this anna.aero analysis are Montenegro, Romania, Slovenia and Ukraine. Data for airports in these countries was only available until either March or April which was not considered recent enough for inclusion.