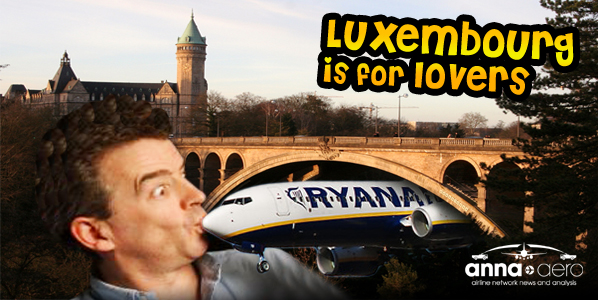 Having identified with Frankfurt since 1999, maybe Ryanair could reverse its declines at Hahn by becoming Luxembourg East?

Ryanair made Hahn Airport (around 120 kilometres from both Frankfurt and Luxembourg) a base in February 2002 with the launch of eight new routes, but it had been serving the airport from London Stansted since April 1999, and Shannon since May 2000. As of this summer, anna.aero estimates that Ryanair has served a total of 81 destinations from Hahn, but never more than 54 at any one time. 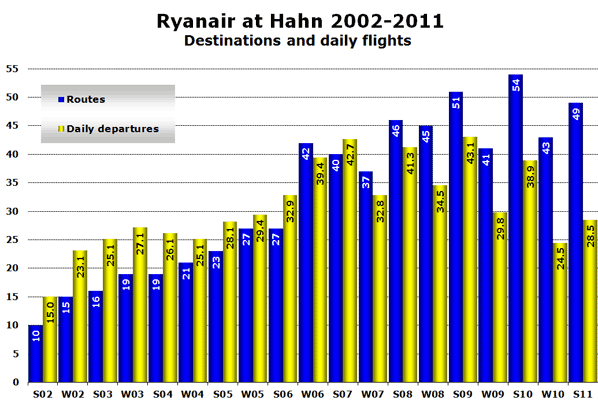 As just about the only scheduled carrier at the airport (Wizz Air currently offers flights to Budapest, Katowice and Sofia), Ryanair’s passenger numbers at the airport are close to the airport’s total. These peaked at just under four million in 2007, falling less than 1% in 2008. However, in 2009 traffic fell by 3.7% and then a further 7.9% in 2010. In the first half of 2011, passenger numbers have fallen by a further 11.8% to just under 1.4 million. Despite this, Ryanair has started three new routes this summer, all to Greece (Chania, Rhodes and Thessaloniki), as part of its current network of 49 destinations served this summer.

Average route frequency has fallen by over 60%

A notable feature of the airline’s development at the airport has been the trend in average weekly frequency across all routes. Back in the summer of 2003, Ryanair operated around 25 daily flights across 16 destinations resulting in an average of 11 weekly flights on each route. This summer, it is operating around 29 daily flights, but spread across 49 destinations, resulting in each route having an average of just 4.1 flights per week. 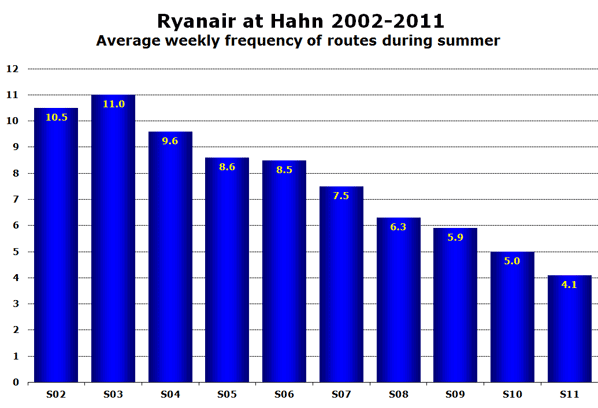 A similar rapid decline in average route frequencies can be seen if just the winter seasons are examined.

Only eight of the airline’s 49 routes are served at least daily, with London Stansted being the only destination served with at least two daily flights.

Domestic flights to Berlin Schönefeld and Hamburg Lübeck began in 2008. The Hamburg flights lasted just three seasons while the Berlin route was axed at the beginning of this year once the German government’s €8 ‘eco-tax’ was introduced. The tax is also having an effect on the airline’s winter network which according to German press reports will comprise just 31 routes this winter, down from over 40 in the corresponding period last year.