Southwest exits 12 non-stop markets involving 15 airports; so just how poorly did these routes perform in early 2011? 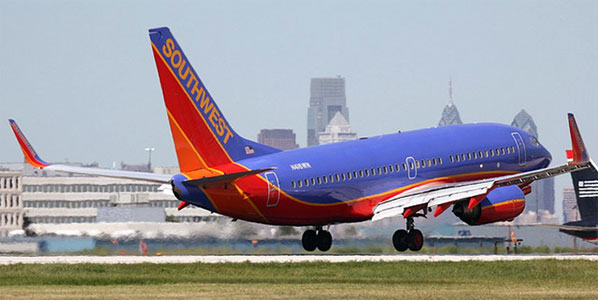 Luv ya, leave ya – four routes have been lost from Philadelphia – overall Pennsylvania (which also loses a route from Pittsburgh) is the hardest hit state in the Southwest cuts. Photo: Paul Karagie philairline.com

As part of its winter scheduling tweaks Southwest recently announced that it would be “exiting 12 markets on a non-stop basis”. These were detailed as:

These 12 routes involve 15 airports spread across 12 states. Pennsylvania with the loss of five routes (four in Philadelphia and one in Pittsburgh) is the hardest hit state, followed by Washington with the loss of four routes (three from Seattle and one in Spokane). Eight of the routes have a sector length of less than 400 miles (640 kilometres), while at the other extreme two are over 2,000 miles (3,200 kilometres).

So what were load factors like on these routes this year?

But exactly how poorly were these routes performing to justify their removal from Southwest’s network? Without average fare data there is no way of knowing for sure, but anna.aero has analysed US Bureau of Transportation Statistics for the period January to April 2011 to at least examine what load factors were being achieved on these routes. 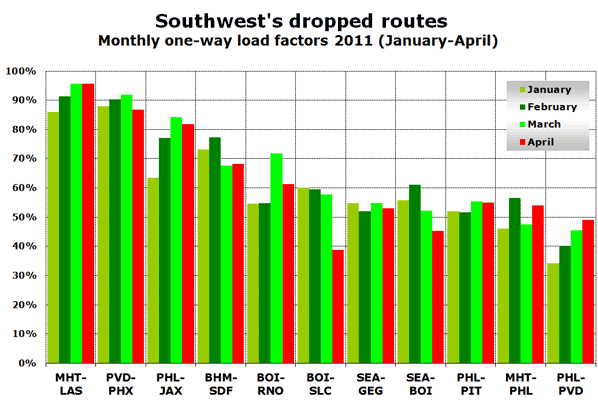 Only the Seattle – Kansas City route was not operated regularly throughout the period 1 January 2011 to 30 April 2011, so is not included in the analysis. The load factors shown are ‘one-way’, from A (listed first) to B (listed second) rather than an average of both directions.

What is surprising is that the dropped routes have a wide variety of average load factors across the four month period analysed. While Philadelphia to Providence (Rhode Island) has an average load factor of only just over 40%, making it an obvious candidate for closure, other routes (notably Manchester – Las Vegas, and Providence – Phoenix) have impressively high load factors for this time of year. However, at 2,350 miles (3,782 km) and 2,270 miles (3,653 km) respectively, both of these routes are well above Southwest’s “average length of haul” in 2010 of 885 miles (1,416 km).