AirTran announces four airports in four states that will be dropped from early next year; Atlanta still dominates network 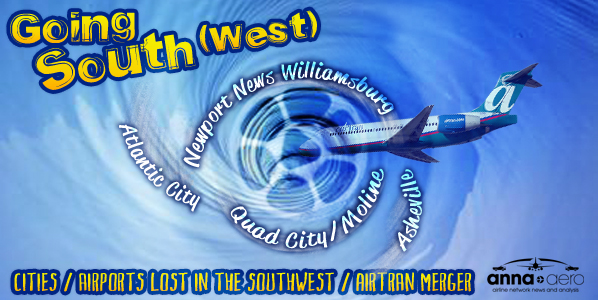 OK – to be fair rationalisations are inevitable in mergers – the biggest impact will be felt at Newport News Williamsburg International Airport (Virginia) which loses four routes and its biggest airline – hopefully the other players will seize the opportunities.

Now that AirTran is a wholly owned subsidiary of Southwest Airlines it was only a matter of time before some significant route changes were announced. Last week the airline revealed that it would be exiting four markets at the beginning of next year. In terms of routes and weekly flights the biggest impact will be felt at Newport News Williamsburg International Airport (Virginia) where four routes will end. AirTran currently accounts for nine daily flights and is the biggest airline at the airport, but will continue to operate these services until 9 March 2012. The other markets the airline will stop serving are Asheville (North Carolina), Atlantic City (New Jersey) and Quad City/Moline (Illinois). The last flights to these airports will take place on 6 January 2012.

Between 1997 and 2007 AirTran grew rapidly from handling just three million passengers to almost 24 million. Average annual load factor also improved significantly from 53% to 76% during the same period. Since then passenger numbers have remained relatively stable, as has the fleet of just under 140 aircraft (almost 90 717s and 50 737-700s), though load factors have continued to climb to an all-time high of 81.4% in 2010. 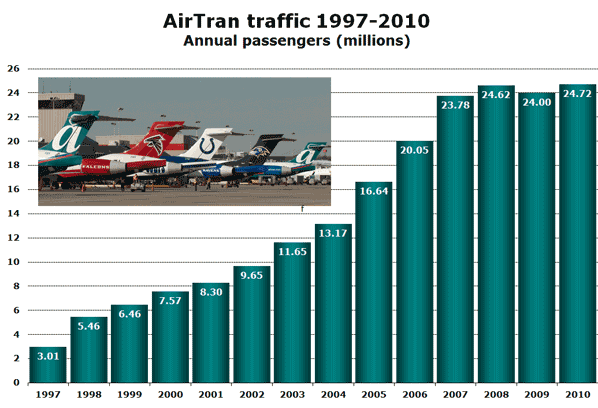 AirTran’s biggest base has always been at Atlanta, the world’s busiest airport, where its operations are dwarfed by those of Delta. Over the years AirTran has diversified its network to include more flights to and from Florida, as well as significant bases at Baltimore/Washington and Milwaukee. 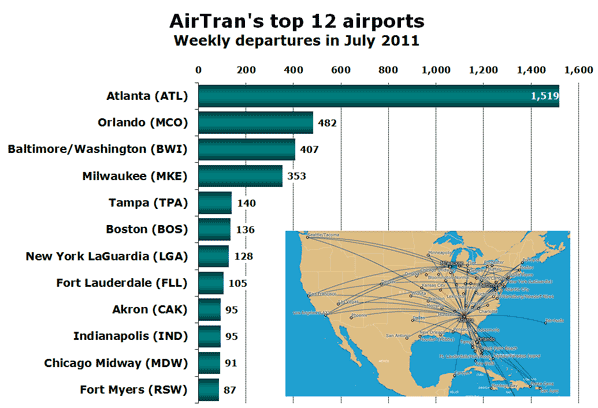 In fact, according to Southwest when the two airlines’ networks are added together, Baltimore / Washington becomes the combined airline’s biggest operational hub with 226 daily departures, just ahead of Chicago Midway with 224 (based on March 2011 data).

165 routes across 70 airports, including seven outside of USA 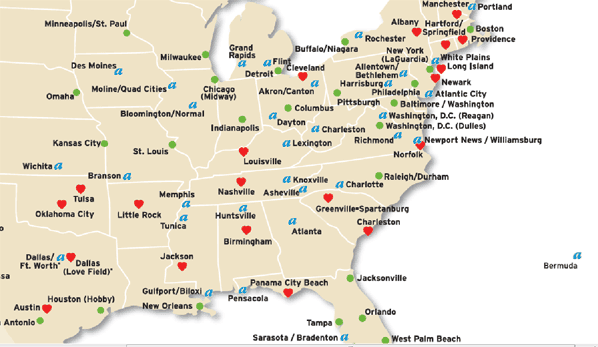 The above map shows all the airports that Southwest and airTran currently serve in the US North-East. The four AirTran destinations that will be axed in early 2012 are highlighted.