A four-tier cake with a silhouette of the Dubai skyline was baked to welcome Emirates to its first Scandinavian destination; Copenhagen. Cutting the cake were Richard Vaughan, the airline’s DSVP Commercial Operations Worldwide, and Copenhagen Airports’ CEO Thomas Woldbye. The cabin crew were also particularly impressed with the cake, which wore one of their trademark hats and scarf.

Last week, Copenhagen (Scandinavia’s busiest airport and the 15th-busiest in Europe in 2010) welcomed Emirates as the latest carrier to serve the Danish capital. Daily flights to Dubai will be operated by the carrier’s A330-200s, joining Gulf Air (which began flights to its Bahrain base only in July), Egyptair’s Cairo service (which was launched last October) and Qatar Airways’ daily Doha flight, in significantly increasing connectivity to Africa, Asia and the Middle East.

Tri-national SAS remains the airport’s leading airline with around 38% of scheduled seat capacity this summer, operating non-stop to over 50 international destinations. Norwegian is now the second biggest carrier at the airport with almost 13% of capacity, spread across almost 40 destinations. Third ranked Cimber Sterling, which focuses on the domestic market and is currently experiencing some ownership changes, has a 9% share of the markets, followed by two UK airlines, easyJet and British Airways.

The UK LCC now serves Copenhagen from eight of its bases across Europe, and has added Basel and Paris during the last 12 months. easyJet is currently the only carrier benefiting from lower charges by using the new low-cost pier, branded CPH Go, which is designed for point-to-point operations. 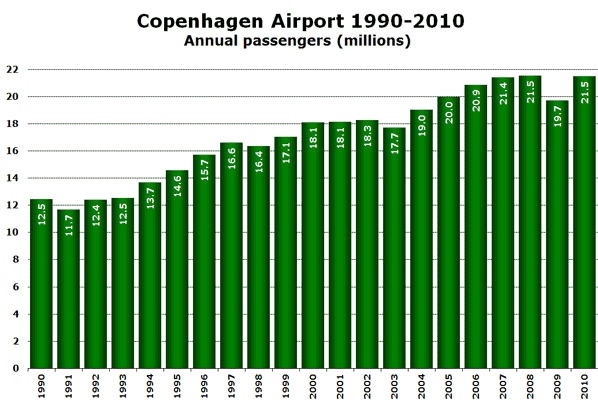 According to OAG data for July almost 60 airlines are operating scheduled services at the airport. Passenger numbers should pass the 22-million mark for the first time this year. Traffic in the first half of 2011 is up over 9%, and even excluding April’s ash-enhanced figure, passenger numbers are up almost 5%. 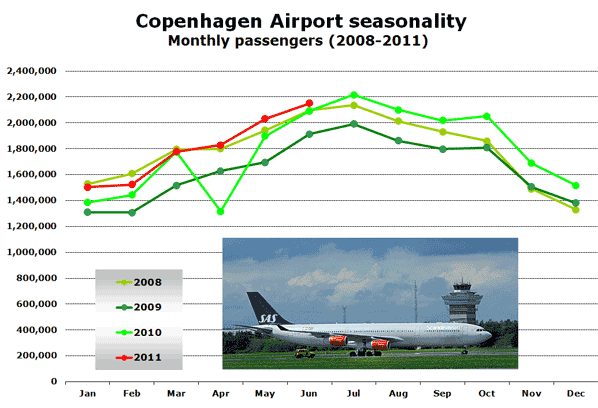 Although Transavia.com (part of the Air France / KLM group) withdrew its base earlier this year, it only operated between five and six daily flights last summer to nine destinations.

In terms of weekly departures, the leading country market from Copenhagen is Denmark, with six other Danish airports served by a mixture of Cimber Sterling, Norwegian and SAS. The only domestic route on which all three compete is Aalborg where each carrier offers over 3,000 weekly one-way seats. 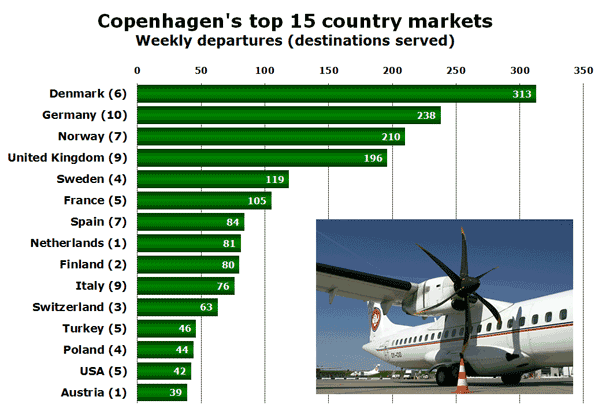 Measured by weekly seats, Germany, Norway and the UK are all slightly bigger than the domestic market. Last September, British Airways added flights from London City airport to complement its London Heathrow services. 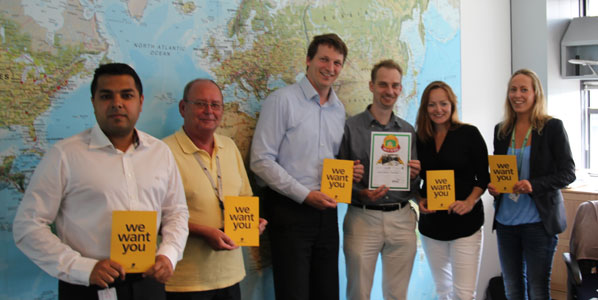 The next cake will be for the 22 millionth passenger! July was the busiest month in Copenhagen Airport’s history as passenger numbers reached 2,283,500, 3.0% up on July 2010 levels, or +8.0% for 2011 so far. July also saw Copenhagen celebrate yet another anna.aero Cake of the Week prize for another Middle East carrier – Gulf Air from Bahrain. The CPH team here are: Majid Khan, Route Development Manager; Lars Korup, Head of Cargo and Handling; Ole Wieth Christensen, Director of Airline Sales and Route Development; Ulv Elbirk, Senior Route Development Manager; Sarah Procter, Key Account Manager; and Maria Prior, Lease Consultant.

Five US hubs served, but no Indian airports

The US market is served by Continental (Newark), Delta (Atlanta and New York JFK) and SAS (Chicago O’Hare, Newark and Washington Dulles) making it the 14th biggest country market by flights and 11th biggest by seat capacity. Over 50 countries are served non-stop, including China where SAS currently operates to Beijing. From next March, it will also operate non-stop to Shanghai with five weekly flights. Other Asian markets served include Bangkok (served by both SAS and fellow Star Alliance member Thai International), Singapore (Singapore Airlines) and Tokyo (SAS). Maybe surprisingly, given that there is a weekly service to Lahore in Pakistan with PIA, there are currently no direct services to India.

New services from Air France, Blue1 and Norwegian this winter

New services already announced for launch in the second half of 2011 include SAS to Palma de Mallorca (from 3 September), Air France to Marseille (from 2 October), Blue1 to Tampere in Finland (from 30 October, operated by Golden Air) and Norwegian to Trondheim in Norway (from 30 October). 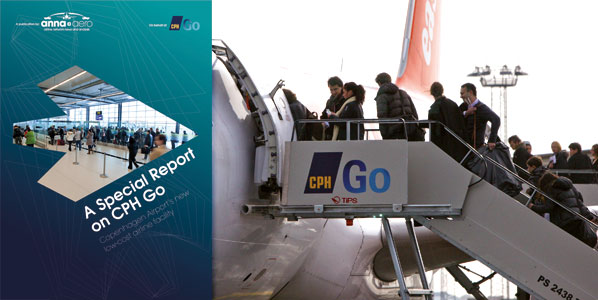 easyJet is currently the only carrier benefiting from the lower charges offered by the new CPH Go pier. (If you would like us to snail-mail you a copy of the anna.aero Special Report on Copenhagen Airport’s new low-cost facility, just click on the image.)