International traffic at Greek airports up 15% in June; tourism gets major boost from uncertainty in North Africa, Ryanair routes Last week’s anna.aero analysis of airport traffic during the first half of 2011 in 34 European countries revealed that just two countries, Greece and Slovakia, were reporting a reduction in demand. Using just data for Athens airport (which represents well over 40% of all Greek airport traffic) indicated that demand was down just over 7%, primarily driven by a 16% reduction in domestic traffic. However, subsequent analysis of data provided by the Hellenic Civil Aviation Authority revealed that other airports performed better than Athens and that overall passenger numbers in the first six months of the year were down just 1.2%. 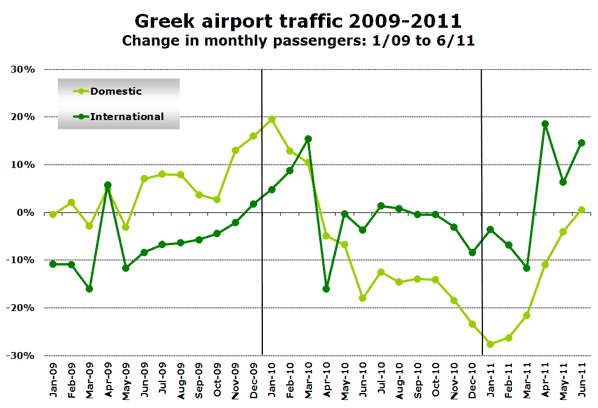 The graph clearly shows that in the second quarter of this year international traffic has shown solid growth, even allowing for the ash-influenced spike in April. Even domestic traffic is recovering gradually. Last year’s rationalization of domestic capacity between the local carriers was mostly complete by May so domestic traffic for the rest of the year is likely to be similar to last year’s figures.

Analysis of the most recent data (provisional figures for June) shows that 13 of Greece’s top 15 airports reported an increase in passenger numbers compared with the previous June. Six airports reported double-digit growth with Kos (+30.8%), Rhodes (+27.1%) and Thessaloniki (+23.2%) leading the way. 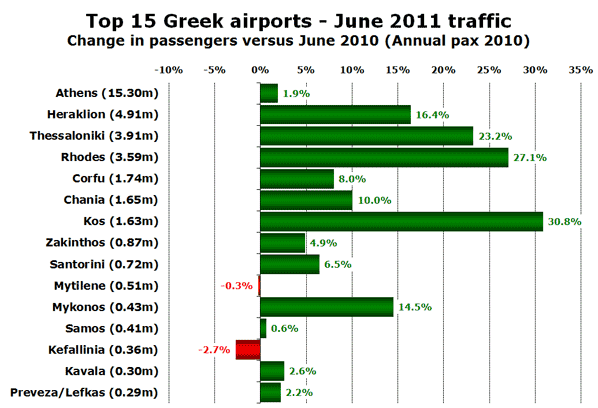 One of the drivers of summer growth at some of these airports has been Ryanair’s development of over 30 new routes spread across six Greek airports which are summarised below. Around three-quarters of these new routes have launched this summer.

easyJet has also increased its presence in Greece and now operates to both Athens and Heraklion from seven bases, to Corfu from five bases, and operates seasonal routes to Chania and Kos from London Gatwick.

After the social uprising in Tunisia and Egypt earlier this year, Greece is probably seen as a relatively safe haven for sun-seeking holidaymakers, despite the country’s own on-going economic struggles. It seems likely that by the end of the year the majority of Greece’s tourist airports will have welcomed more passengers in 2011 than in 2010, though the record set in 2007 (for all airports) of over 41 million passengers looks safe for a couple of years yet. Whether this upturn in fortunes is continued into 2012 may well depend on developments in other tourist hotspots in the region.