Last week’s anna.aero analysis of airport traffic during the first half of 2011 in 34 European countries showed that Ireland ranked 32nd with passenger growth of 3.7%, ahead of Slovakia and Greece which both showed traffic reductions. Since then, Ryanair and the Irish government have been involved in a war of words about the (much reduced) €3 travel tax, which it seems will remain in place for now. With both sides making claims and counter-claims, and using various figures to support their case, anna.aero decided it would be useful to investigate some of the issues further.

Figures from CSO (the Irish Statistical Office) which interviews departing and arriving passengers at airports and ferry ports (almost 90,000 in the first quarter of 2011) reports that although total Overseas Travel was down an estimated 3.0% in the first quarter of 2011, international visitors to Ireland were up 8.6%, while Irish trips overseas were down 11.7%. The year-on-year trend by quarter for these two separate segments for the last few years is shown below. 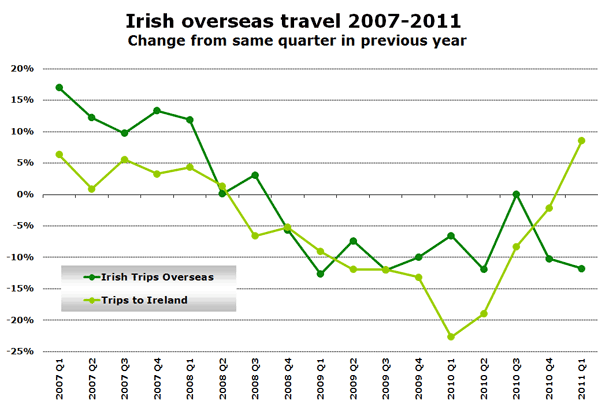 On the other side, Ryanair has repeatedly highlighted how total Irish airport traffic has declined, especially since 2008. This is undeniably true, though hardly unique to Ireland. But is this reduction in demand spread evenly across all country markets? The answer is no, as the graph below clearly shows. 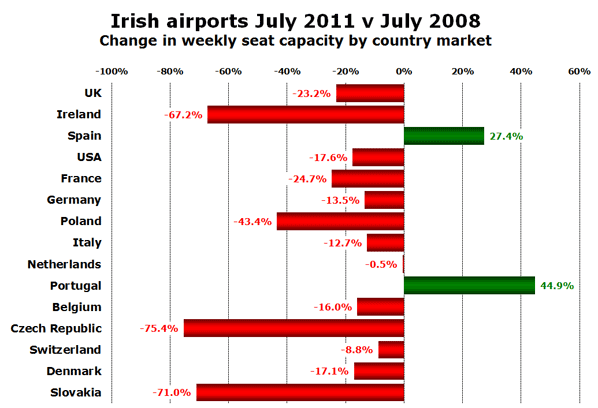 Looking at the 15 biggest country markets from all Irish airports in July 2008, and comparing weekly seat capacity with July 2011, reveals that 13 markets have indeed seen capacity cuts, but that two (Portugal and Spain) have shown significant increases in capacity. Portugal and Spain are two country markets which are likely to generate many more “Irish Trips Overseas” than “Trips to Ireland”. One of the Irish government’s issues appears to be that it does not want to be seen to be subsidising Irish holidaymakers going abroad. It would prefer to encourage routes and markets that have a higher proportion of inbound traffic, which will help boost the nation’s economy.

anna.aero believes over 80% of passengers on flights to and from Greece, Spain and Portugal are likely to originate in Ireland, while routes to destinations in Germany and Scandinavia are more likely to consist of around 50% inbound tourists, or business traffic, which are viewed as more beneficial to the Irish economy (in very simplistic terms).

Our beliefs for the inbound/outbound content of these routes stem from UK experience which can be used as a reliable indicator for Ireland: Using data collected by the UK CAA across all London airports in 2008, anna.aero has ranked some of the leading international markets by the share of passengers originating in the UK. (London Heathrow figures were ignored as its hub status and focus on flag-carriers makes it significantly different from other UK airports.) Where data was available for London Gatwick this was used, followed by London Stansted and London Luton. Gatwick in particular could be a valid proxy for Dublin, as it has a mix of transatlantic flights, a flag-carrier base (British Airways) and a significant low-cost presence (easyJet, Ryanair and charter carriers). 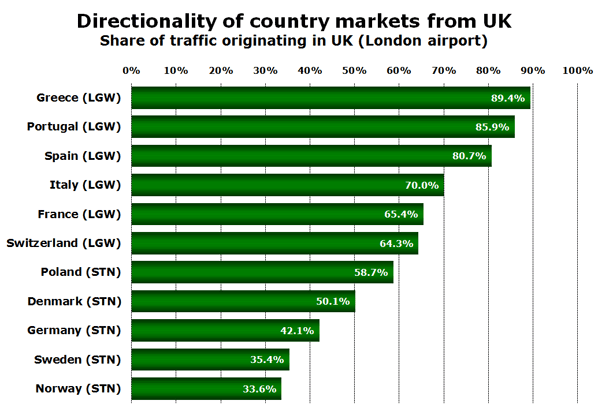 anna.aero believes that these resulting inbound/outbound shares are likely to be similar for traffic from Irish airports. Indeed, from personal experience at both a legacy carrier (British Airways at Birmingham in 2000) and a low-cost carrier (Go at London Stansted in 2001/02) anna.aero’s Editor can confirm these percentages are consistent with his experience of the split between inbound and outbound traffic to various country markets.

But while the Irish government is therefore right to be cautious about Ryanair’s claims about generating additional inbound tourism/business, the true relationship about how wealth and prosperity is created by air services is truly very complex and, like many dynamic market forces, is best when not interfered with, especially in Ireland where tourism is so important. Certainly there is a far clearer correlation between simply having strong all-round air traffic growth and strong GNP growth, than there is when blunt attempts are made to engineer advantages between ‘inbound’ and ‘outbound’ services, as is one of the suggested benefits of the Irish taxes.

Meanwhile, anna.aero will continue to monitor the claims made by both parties and continue to bring interesting, revealing and unbiased analysis to our readers.