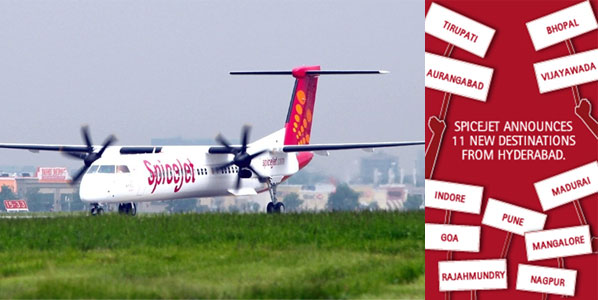 The first four SpiceJet Q400 NextGens (from a 15+15 option order) will operate 11 routes from Hyderabad, seven of which are new to the airline – Aurangabad, Bhopal, Indore, Mangalore, Rajahmundry, Tirupati and Vijayawada.

SpiceJet, India’s ‘budget’ airline that carried 6.7 million passengers in 2010, has revealed what it plans to do with the first batch of Bombardier Q-400s it is receiving this month, direct from the manufacturer. The four aircraft (of a total order of up to 30) will be based at Hyderabad’s Rajiv Gandhi International Airport, where SpiceJet currently has 12% of seat capacity, operating 18 daily flights to nine destinations, using some of it 26 737-800/900s. SpiceJet currently ranks as only the fifth busiest airline (in terms of scheduled seat capacity) at Hyderabad after IndiGo, Jet Airways, Air India and Kingfisher.

Between 21 September and 4 October, SpiceJet will use its new Q-400s to operate 33 new daily sectors including 11 routes from Hyderabad, seven of which are new to the airline. The new destinations are Aurangabad (IXU), Bhopal (BHO), Indore (IDR), Mangalore (IXE), Rajahmundry (RJA), Tirupati (TIR) and Vijayawada (VGA). These are all classified as either ‘Tier-II’ or ‘Tier-III’ destinations. Of these, only Aurangabad and Mangalore are not already served non-stop from Hyderabad by other airlines, as the table below shows.

Q400s will depart Hyderabad at 15 minute intervals starting at 06:25

Announcing this development, SpiceJet’s CEO Neil Mills said, “We decided to strategically focus on improving air connectivity in Tier-II and Tier-III towns as we believe there is a large market in India which is yet to be touched by the benefits of the aviation revolution. With the launch of our Q-400 turbo-prop operations, Mr. Maran’s vision to offer extensive domestic coverage to SpiceJet passengers in Tier II and Tier III cities is now being realized. We are very happy to be entering this new phase of growth, which we believe holds the future of the aviation industry in the country.”