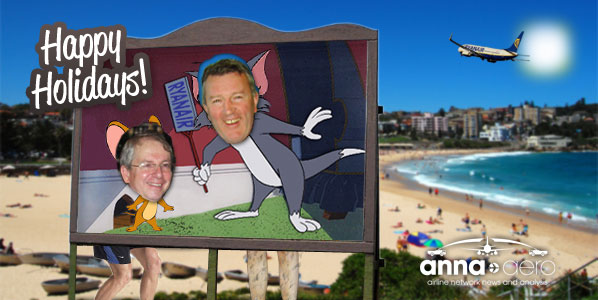 anna.aero's Editor Ralph Anker is on holiday this week.

I’ve read your analysis of Ryanair vs. Irish Govt in last week’s edition of anna.aero and would make the following comments;

You highlighted the fact that overseas travel was down by 3% in Q1 but visitor numbers up by almost 9%.

(anna.aero note: These Central Statistics Office figures include ALL travel, including ferries)

Given that over 90% of the tourists arrive by air these are hardly credible figures. We carry close to 50% of the total passengers and our numbers clearly indicate that the inbound proportion of our passengers is down by more than the total fall, a fact borne out by your analysis that the only growth in your individual country analysis was to Spain and Portugal, largely outbound markets in themselves.

(Or in other words: Ryanair’s figures suggest the opposite to the CSO trends – that inbound traffic is declining; Cawley is saying this is supported by the anna.aero analysis of capacity falls in all markets except Spain and Portugal, which generate only limited inbound traffic)

As a consequence, those markets with more incoming .passengers actually declined, which would lead one to believe that the decline in visitor numbers was at least as much if not more than the overall decline in passenger traffic. That is the key issue here, and one that got slightly lost in your analysis, in that you didn’t definitively highlight that inconsistency in the numbers from the Central Statistics Office. Remember: Their analysis covers just 90,000 passengers who were asked one question (“What is your country of residence?”) so I would have thought the room for error is quite considerable and is highlighted in these numbers.

(Or in other words: Cawley is saying CSO’s survey methodology leaves a lot of room for error. This gives greater weight to the indications of the opposite trend: That inbound traffic, if not falling more than outbound traffic, is at least falling at the same level.)

On a second point, the issue of influencing the number of passengers coming into the country without generating any growth out of Ireland is an interesting one. As the only truly pan-European airline with in excess of 15% of its traffic coming from each of the UK, Spain and Italy and a further 12% from Germany, Ryanair is the airline best placed to maximise inbound traffic to Ireland rather than Aer Lingus whose predominant constituency on short-haul is Ireland itself. Therefore overall Ryanair carries far more people into Ireland from Europe and the UK than any other airline and also carries more as a proportion of the total on an inbound basis than does Aer Lingus on its short-haul network.

(Or in other words: Ryanair, with a strong presence in key foreign markets, believes it can bring more inbound passengers to Ireland than Aer Lingus, which is stronger in Ireland itself and thereby is more likely to keep a large share of outbound passengers)

You are quite right in highlighting the fact that additional inbound tourism/business is likely to prosper best when that market is not interfered with by taxing outbound traffic, while not taxing inbound traffic. But you should have gone the step further to emphasise that if you do take the approach of dealing with them both in the same way, by eliminating the tax for both, then the optimum outcome for Irish tourism, in terms of maximising inbound traffic, surely lies with Ryanair’s franchise around Europe which has such pulling power out of all the major markets from which the Irish government seeks to maximise its tourism numbers.