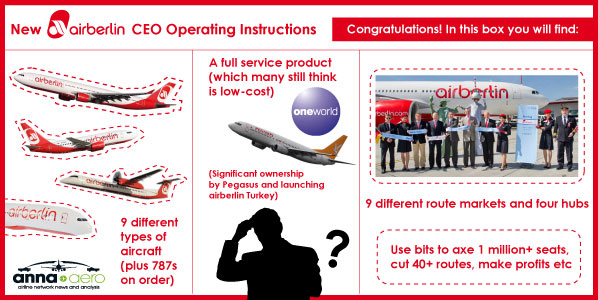 For some time now, airberlin has been a puzzle to many observers. What sort of airline is it? Originally a charter airline focusing on taking Germans on holiday to Palma de Mallorca, it expanded its scheduled operations as a ‘low-cost’ airline in 2002 and developed a ‘City Shuttle’ product to complement its ‘Palma Shuttle’ operations, which merged into a ‘Euro Shuttle’ brand. It acquired a domestic network when it bought dba (originally known as Deutsche BA) in 2006, and then acquired LTU, a long-haul charter airline in 2007. It also became an investor in Vienna-based niki (Niki Lauda’s airline – and later bought it outright) and also developed a link with LGW (a small regional airline, not the airport) which it uses to operate niche routes using Q400s. A year ago, airberlin announced that it would be joining the oneworld alliance. Clearly, it can no longer claim to be a low-cost airline (although many people in the media continue to refer to it as such) when it operates nine different aircraft types ranging from Q400s to A330s.

airberlin last made a (small) profit in 2007 and, after announcing its disappointing Q2 results for 2011, its long-serving CEO Joachim Hunold announced that he was stepping down as CEO from 1 September. At the same time, a ‘Shape and Size’ review was announced aimed at making the airline more profitable. Plans to reduce the fleet by eight aircraft (out of 170) were revealed for the second half of 2011, as well as a reduction in capacity of around one million seats and the axing of a number of routes starting this winter.

But how to summarise airberlin’s existing network? The airline itself promotes the fact that it has four ‘bases’; in Berlin (Tegel), Düsseldorf (helped by LTU acquisition), Palma de Mallorca and Vienna (thanks to Niki). However, anna.aero has segmented the airline’s network into nine separate markets based on traffic flows. The following graph shows the share of each market in terms of flights, seat capacity, and carrying capacity (ASKs – Available Seat Kilometres). 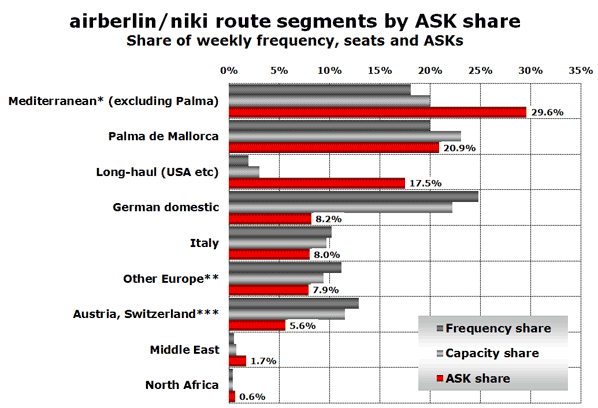 This graph highlights the airline’s leisure origins as 50% of ASKs is still to and from price-sensitive destinations in the Mediterranean (Greece, Portugal and Spain). airberlin’s US routes (five routes from Düsseldorf and two from Berlin) account for over 50% of the airline’s long-haul ASKs, and indeed one-sixth of the airline’s total ASKs, despite accounting for only 2% of its flights!

Meanwhile, domestic operations represent one-quarter of all flights (and seats) but only 8% of ASKs, about the same as all of the airline’s routes to Italy, and also to other non-Mediterranean destinations. One in eight flights are short-haul international services between Germany, Austria and Switzerland.

One market noticeably absent is Turkey, although the airline’s biggest single shareholder (with around 17%) is ESAS Holdings, the company that owns Pegasus Airlines. Latest reports from Germany indicate that airberlin and Pegasus plan to create a new airline, Air Berlin Turkey, offering charter flights to Antalya starting this winter. So just when it seems the airline is going upmarket by joining an alliance, it also rediscovers its charter roots.

Four designated hubs; two in Germany, one each in Austria and Spain

airberlin’s recent announcements have spoken of the airline’s plans to focus more on its four main hubs in Berlin, Düsseldorf, Palma and Vienna and downsize operations at its regional airports. Based on schedule data for September, these four airports are indeed the airline’s biggest in terms of weekly flights, although it offers more routes from Munich than Vienna and almost as many flights. 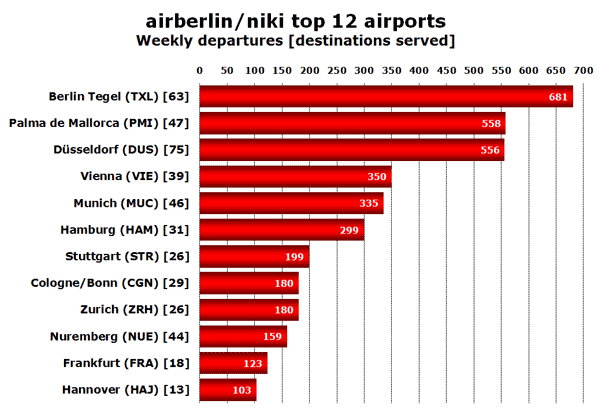 According to OAG data, the airline currently operates almost 500 routes across a total of 144 airports, including 15 where it operates just a single weekly flight. With its strong focus on leisure routes, analysis of routes by weekly frequency reveals that over half of the airline’s routes during the summer are operated with just one or two weekly flights. 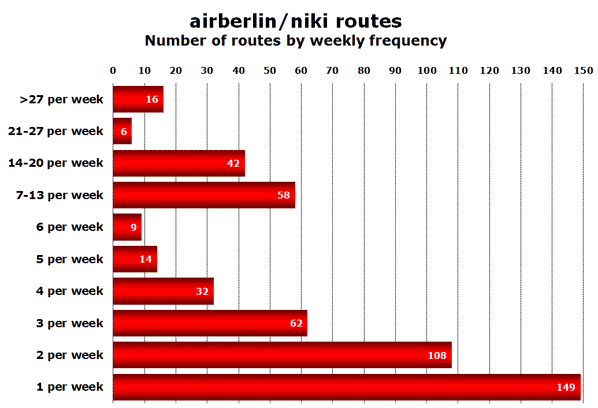 Just over 120 routes are operated with at least daily frequency, with the route between Berlin Tegel and Cologne/Bonn having the most weekly departures at 63.

Routes dropped from many airports; Erfurt to lose all flights

Only Erfurt (or Erfurt-Weimar as it has recently been re-branded) will see a complete withdrawal of airberlin services, and has responded quickly by getting the state government involved in the hope of maintaining services for next summer.

Possibly the most significant axing is the Frankfurt-Hamburg service (the fourth busiest domestic route in Germany) which airberlin only launched in October 2009. Despite the fact that the resulting competition made this the fastest-growing major German domestic route in 2010 (up 23%), Frankfurt-Hamburg will now revert back to a Lufthansa monopoly.

Will next CEO make drastic changes?

While airberlin has been quick to blame the German aviation tax, high fuel prices, and the civil unrest in North Africa for its poor financial performance in Q2, the airline’s eclectic route network is clearly not helping. The airline’s next CEO will be faced with the challenge of turning the airline into a consistently profitable enterprise. Clearly, this will involve cutting more unprofitable routes and developing a more focused network and product strategy more readily understood by the airline’s business and leisure customers. airberlin has appointed a board member, Hartmut Mehdorn, to succeed the outgoing CEO on an interim basis. Perhaps significantly, Mehdorn is the former boss of the German rail company, Deutsche Bahn, not exactly the sort of enterprise known for launching lots of interesting routes between all sorts of new places, unlike the airberlin that has excited everyone so much, particularly over the past 10 years.