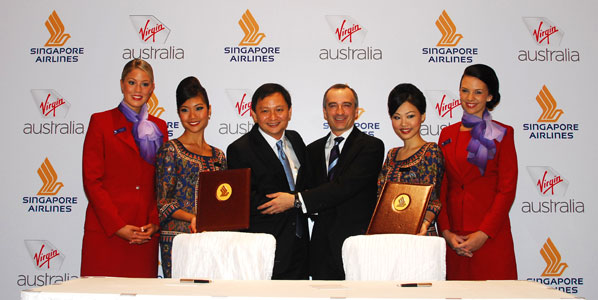 Virgin Australia is not only focusing on its soon-to-launch regional ATR operations, but has also forged a partnership with Singapore Airlines. Is this yet another step closer for the airline to Star Alliance, which lost its Australian member Ansett Australia in 2002?

Demand for air travel in Australia in the second quarter of this year grew by 2.7%, despite a dip in June caused by an ash cloud (from Chile’s Puyehue-Cordon Caulle volcano), closing airports and disrupting traffic for several days. In April and May, domestic passenger numbers were up 3.9% and 5.5% respectively, before falling 1.3% in June. July figures will be affected by the grounding of Tiger Airways at the beginning of the month. The Civil Aviation Safety Authority has only recently lifted the ban, with Tiger resuming services on 12 August with flights between Melbourne and Sydney. Since then, it has also restarted daily flights between Melbourne and Brisbane on 18 August, with a second daily flight being added on 23 August. 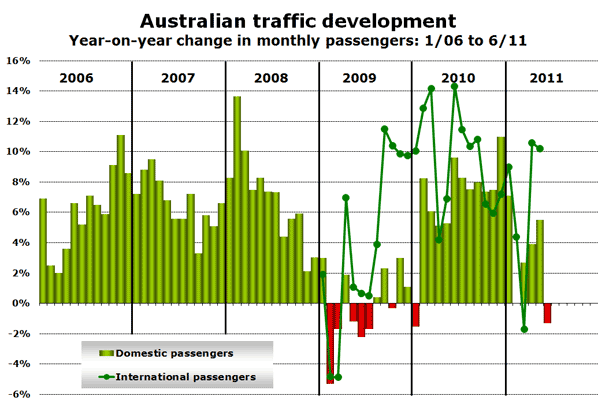 Virgin Australia recently announced which routes it would be serving with 68-seat ATR turboprop aircraft (operated and maintained by Skywest). The first new route will be launched on 17 October when double-daily flights (on week days) between Brisbane and Gladstone will be introduced. Two days later, daily flights between Brisbane and Port Macquarie will commence. These are both new routes for the airline. In addition to new routes, the ATRs will replace Embraer 170s and 190s on the existing double-daily Sydney to Port Macquarie route, and between Sydney and Canberra, both from 19 October.

International traffic falls in March; up over 10% in April and May

For the first time in exactly two years, international traffic fell in March, by 1.7% from 2,145,529 to 2,109,220. A closer look at the year-on-year traffic trends for the top 10 international airlines shows that in March seven of the top 10 international airlines reported a fall in traffic numbers. Malaysia Airlines has seen passenger growth of at least 25% in each of these three months. In April, only Jetstar had fewer passengers than in the previous April, while Emirates suffered a similar fate in May. While Qantas remains the biggest airline for international passenger numbers, its share of the total market is less than 20%, although its low-cost subsidiary Jetstar has a further 8% of traffic.