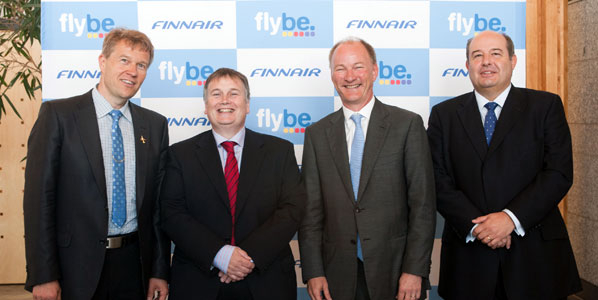 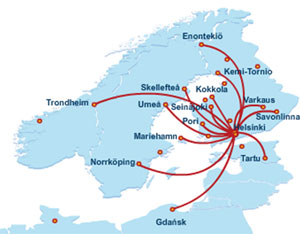 Last week, Finnair and Flybe completed the deal to acquire Finncomm Airlines, and less than a week later, Flybe has announced nine new routes to complement Finncomm’s existing network of 15 routes. Four of the new routes are from Helsinki (bringing Flybe’s network at the airport to 15 destinations – see map), while the remaining five are all to Tallinn in Estonia, four from airports in Finland and from Sweden’s Stockholm Bromma.

Only one of the nine new routes is currently served by another carrier, which is both an opportunity and a risk. It will be interesting to see if (or when) frequencies on these new routes are adjusted now that seats have gone on sale and also what happens to the operations of the competing virtual airline Air Åland, for whom NextJet operates between Helsinki and Mariehamn 18 times weekly.

Mike Rutter, Managing Director Flybe Europe, said: “Flybe is extremely proud to have this opportunity to serve Finland, Estonia and the Nordic/Baltic states’ area. It is a moment we have been working towards for a long time. Today marks a brand new era of affordable travel choices for both leisure and business passengers to the region.”

Rutter added: “Flybe’s partnership with Finnair will offer the same high standards of service that passengers have come to expect from Finncomm – and more. Our joint vision is for Flybe to become the leading regional airline for the Nordic and Baltic regions. We expect the new brand to become quickly established and recognised as the airline of choice for both leisure and business travel. We will be working very hard to ensure that the transition of Finncomm into Flybe over the next two months will be as seamless as possible. Passengers will continue to see the same friendly, professional cabin and flight crews welcoming them on board all of the routes that have been flown by Finncomm.”