Earlier this month, Firefly launched a new route between Kuala Lumpur International Airport and Sandakan on the island of Borneo with 737 aircraft, but the airline will soon be reorganised to operate regional aircraft with full service.

The recently announced decision that Malaysia Airlines (MAS) and AirAsia will collaborate more fully in the future has raised questions about the future of rapidly expanding Firefly, the low-cost ‘community airline’ that is 100% owned by MAS and operates a mixed fleet of 10 ATR 72-500 turboprops and eight 737s, mostly from the -800 series. Firefly currently operates 28 routes of which 12 are international (to Indonesia, Singapore and Thailand) and the most recent, between Johor Bahru and Bandung (in Indonesia), of which launched last week with three weekly flights using one of the airline’s 737-400s.

It seems that Firefly’s future will be as a pure turboprop operator, but with increased service quality, while the 737s will be spun-off into a separate airline called Sapphire, which has been described as Malaysia Airlines’ equivalent of Cathay Pacific’s Dragonair, or Singapore Airlines’ Silk Air. Of Firefly’s current network of 28 routes, 20 are operated by the ATRs. 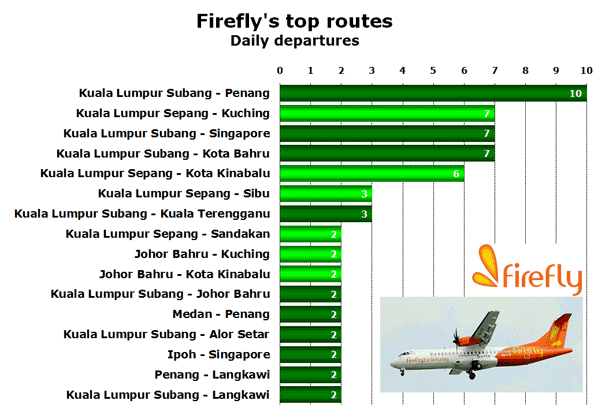 All of the airline’s routes that operate with at least three daily flights involve one of the two airports serving Kuala Lumpur. Subang Airport used to be the main airport until the new airport at Sepang (next to the F1 Grand Prix track) opened in 1998. Airlines were basically forced to move to the new airport, although the government currently allows turboprop operations from Subang, where Firefly is the leading airline. Firefly’s 737 routes (shown in light green in graph above) are all from Kuala Lumpur’s main airport at Sepang (where it competes with AirAsia) and from Johor Bahru, located on the border to Singapore.

Since the beginning of the year, Firefly has launched a significant number of new routes that are summarised in the following table.

In addition, the airline has announced that it will launch two new routes from Malacca (to Penang and Kota Bahru) from 19 November, both operated with the ATRs. Back in mid-July, Firefly announced plans to start three daily flights between Kuala Lumpur Sepang and Langkawi from the beginning of December using 737-800s. In light of recent developments, it will be interesting to see if the route is launched and whether Firefly or Sapphire will be the operating airline.