Aberdeen’s strong petroleum industry gives the local airport an exciting mix of routes. In May, the Scottish airport became the second UK destination for Azerbaijan Airlines after London Heathrow, and Stavanger – Norway’s main oil city – is served by three airlines from Aberdeen.

With just under 2.8 million passengers last year, Aberdeen’s airport was the UK’s 15th busiest, and third busiest in Scotland after Edinburgh and Glasgow. Although passenger numbers fell by 7% in 2010, this year the airport has reported year-on-year growth in every month and is gaining passengers at around twice the rate of UK airports as a whole. In the last 12 months, it has also welcomed new services from Aer Lingus Regional (to Dublin), Azerbaijan Airlines (to Baku), easyJet (to London Gatwick), Flybe (to Manchester), and at the end of October will welcome triple daily Lufthansa flights from Frankfurt. 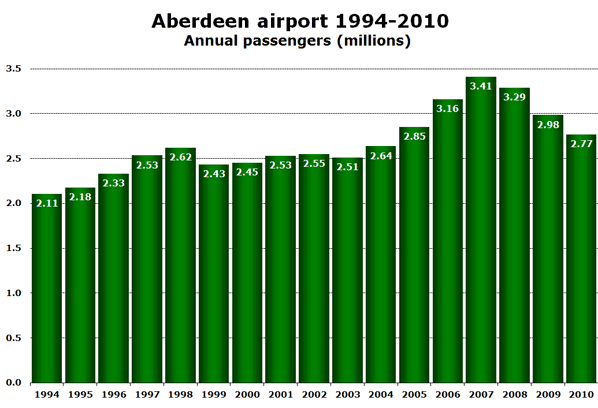 As an airport focusing primarily on business traffic (especially related to the oil and gas industry), seasonality is not a major issue. As a result, last April’s ash cloud induced dip stands out. This year’s figures are not only better than 2010 but also above 2009 levels, indicating that the airport should once again be above the three million passenger mark at the end of the year. 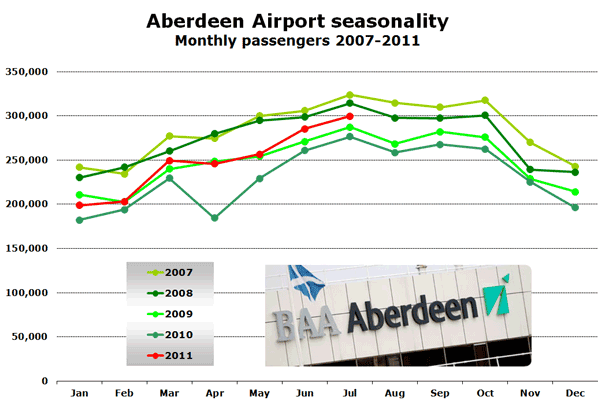 Eastern Airways has most routes, flights; Flybe offers most seats

Aberdeen airport is dominated by UK domestic routes and thus UK airlines. Eastern Airways, with its fleet of Jetstream 41s and Saab 2000s, operates the most weekly flights and offers the widest range of destinations (12), but Flybe with its bigger aircraft offers the most weekly seats spread across eight domestic routes. British Airways ranks second by seats despite offering just one route, to London Heathrow. 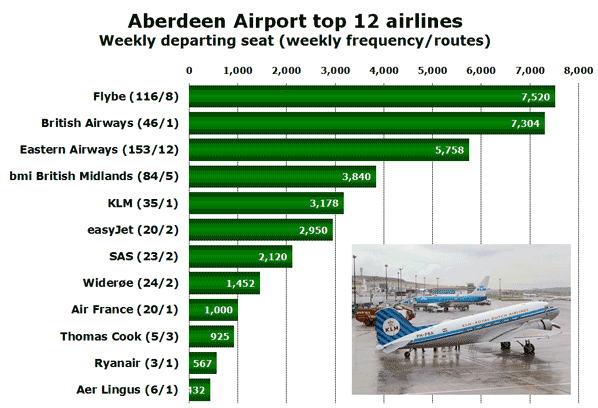 easyJet and Ryanair have a limited presence at the airport, although easyJet added London Gatwick services in June to complement its existing London Luton services, while Ryanair offers three weekly flights to Dublin.

KLM is the biggest airline from mainland Europe with its 35 weekly flights to its Amsterdam hub. Air France also offers flights to its Paris CDG hub and SAS serves Copenhagen. This winter will see the launch of Lufthansa services to Frankfurt, taking advantage of the additional runway capacity at the German airport.

Three airlines compete for passengers to Stavanager in Norway