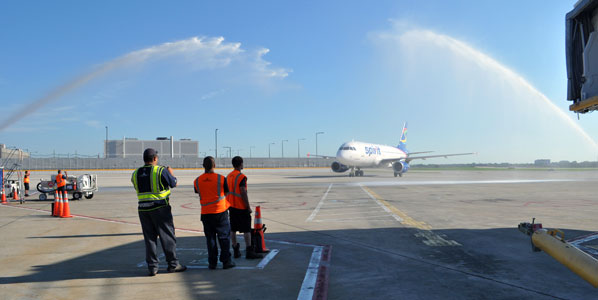 Spirit Airlines’ first of the new flights at Chicago O’Hare was welcomed upon arrival from Boston. The low-cost carrier is now increasingly flying high-frequency major trunk routes in direct competition with legacy network carriers; a sharp contrast from its leisure roots.

Self-styled “Ultra Low Cost Carrier” Spirit Airlines this week launched four new routes from Chicago O’Hare, increasing its range of destinations to 10. Unlike its existing destinations, which were primarily to leisure destinations on the east coast, these four new routes see the airline moving into major city markets; Boston, Dallas/Ft Worth, Detroit and New York.

On each of the new routes, there is direct competition with both American Airlines and United Airlines, while Delta also serves Detroit and New York LaGuardia, and JetBlue competes on Boston. A summary of the airline’s Chicago O’Hare operations and the competition it faces on each route is shown below.

Las Vegas services only began last November, followed by Atlantic City in March this year and Los Angeles in April. Spirit Air also offers seasonal non-stop daily flights to Fort Myers which will resume in November. In addition, the airline is launching daily flights to Orlando starting in November. This route is currently served by American and United, both offering between four and five daily flights. “We are thrilled to be adding service from Chicago to five new cities and are excited to be giving even more consumers the opportunity to save money on travel. Our ultra low base fares with a range of optional services for a fee allows customers the freedom to choose only the extras they value,” said Spirit Executive Vice President and Chief Marketing Officer Barry Biffle.

“We commend Spirit Airlines for substantially increasing its US travel destinations from O’Hare International Airport,” said Chicago Department of Aviation (CDA) Commissioner Rosemarie S. Andolino. “New air service to the Chicago market is an important part of Mayor Rahm Emanuel’s vision to bolster Chicago’s leading position in the global aviation system while creating new economic opportunities. Spirit’s focus on sustainability, including the efficiency of its modern fleet, and energy conservation programs at Spirit headquarters, are a great fit with Chicago’s green initiatives and the CDA’s strong commitment to the environment.”

“We are extremely pleased to see Spirit Airlines add service from DFW to Chicago O’Hare, in addition to its service to Fort Lauderdale and Las Vegas,” said Jeff Fegan, CEO of DFW International Airport. “It’s great to see that Spirit sees an opportunity for growth and competition here at DFW, which will benefit our passengers with even more travel options and competitive fares.”

“With Spirit flying from Boston Logan International Airport to Chicago’s O’Hare Airport, the low-cost carrier brings competition to an important market,” said Ed Freni, Director of Aviation at Massport. “This is great news for New England because competition means lower fares and consumers – whether they are travelling for business or leisure – end up winning.”

“Adding Spirit Airlines to the Detroit-Chicago mix is exciting for our customers, and important for Detroit Metropolitan Airport,” said Wayne County Airport Authority (WCAA) Board Chair Renee Axt. “It gives passengers more options, keeps costs down and grows the business market between the two cities.”