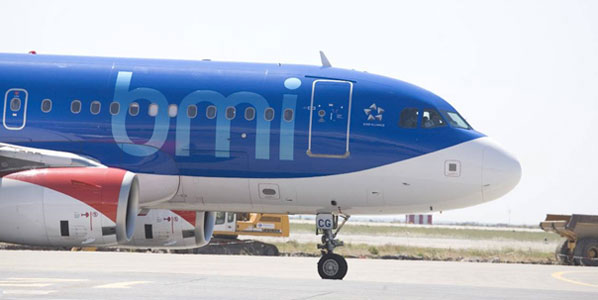 After a fall in the London-Nice market in 2010, the city pair is again growing fast. The latest carrier to want a piece of the cake is bmi, which put an end to the easyJet/British Airways duopoly when it launched daily flights to the French airport from its London Heathrow hub last week. (Just in case you are wondering, this is genuinely the picture from the route launch – experts among you will notice the azure blue sky could not be anywhere else but Nice.)

Between 1995 and 2000, passenger numbers between London and Nice doubled from 551,000 to almost 1.1 million, primarily thanks to easyJet that began serving the French Mediterranean airport from London Luton in June 1996. The airline also began flights from London Gatwick in July 2001, while Go had started flights from London Stansted in May 2001 (which were taken over by easyJet in 2002). However, traffic between the two cities peaked in 2007 at 1.33 million, since when passenger numbers have fallen by 4% in 2008, 5% in 2009 and a rather alarming 18% in 2010. 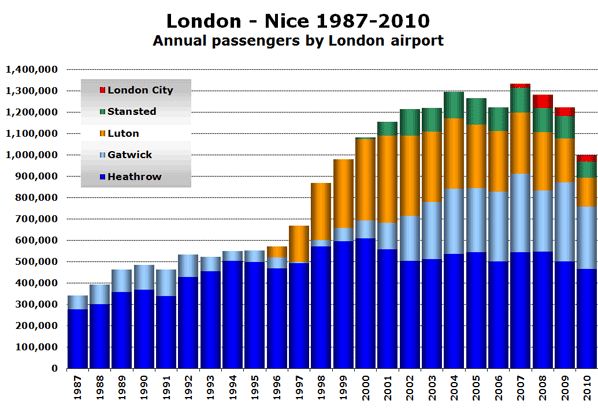 Traffic back up 13% so far this year

In the first seven months of 2011, passenger numbers have recovered well from last year’s dip. Overall across all London airports, demand is up almost 13% with only Luton failing to deliver at least double-digit growth.

Now, bmi British Midland International has launched daily flights from London Heathrow with an A319, increasing to double-daily at the start of the winter season. These services will compete head-to-head with British Airways and help further stimulate the London – Nice market.

For the last two years, the London – Nice market has in effect been a duopoly with only British Airways and easyJet serving the route. While easyJet has maintained frequencies at Gatwick (and seen off brief competition from Aer Lingus), at Luton and Stansted, combined weekly frequencies have fallen from 42 in August 2008 to 35 in August 2009 to just 20 in August 2010 before picking up again to 25 this summer.