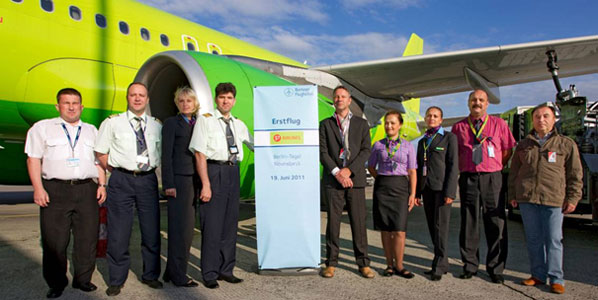 Berlin’s two airports are growing its international traffic the fastest of German airports. In June, Tegel welcomed a new route from Novosibirsk on the Russian airline S7, which thereby connects with the hub of its future oneworld alliance partner airberlin.

Latest figures from ADV show that German airport traffic (including transit passengers) rose by 2.9% in July. Domestic traffic was down 2.1%, but this was more than compensated for by international growth, with European traffic doing particularly well up 6.1%. Leading the way in this market segment were Berlin (Tegel and Schönefeld combined) with growth of 11.9%, and Munich, which saw 11.2% more passengers on international European flights. Düsseldorf and Munich also reported growth of close to 9%, while at the other end of the scale were Ryanair’s bases at Frankfurt Hahn (-16.2%) and Weeze (-18.6%). Non-European traffic was down 0.1%, although Frankfurt (which accounts for almost two-thirds of this market segment) saw its traffic rise by 2.1%.

Analysis of traffic trends across Germany’s top 10 airports shows that in five of the first seven months of 2011, Berlin Tegel has been the fastest growing, beaten only in January (by Munich) and April (by Hannover). Cologne/Bonn has seen year-on-year passenger numbers fall in every month this year (except April), highlighting how the government’s so-called “eco-tax” has hit low-cost airlines, which make up the majority of Cologne/Bonn’s traffic, harder than legacy airlines. 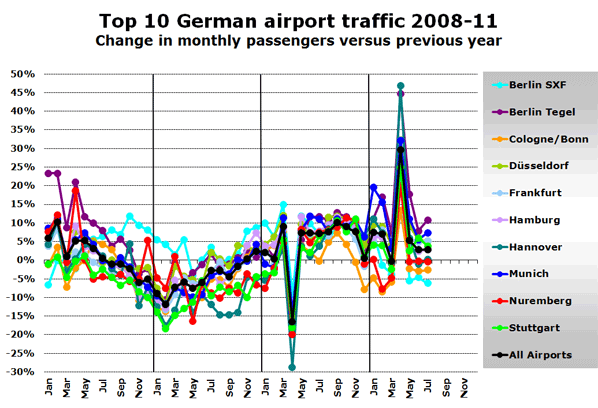 Ryanair has responded to the “eco-tax” by considerably downsizing its German route network. At Frankfurt Hahn and Weeze, where the carrier accounts for over 90% of seat capacity, total terminal passengers in July were down 21.7% and 22.8% respectively. At Bremen, where Ryanair is responsible for around 45% of scheduled seat capacity, terminal passenger numbers in July were down 10.6%.

Bremen Airport is also breathing a sigh of relief that niche carrier OLT, which has operated a number of routes from the airport (Bristol, Copenhagen, Toulouse and Zurich), has apparently been rescued by a Polish investor. The carrier had recently got into financial difficulties after losing its contract to fly Airbus employees between Hamburg and Toulouse to German rival Germania.