The ribbon for United’s new service to Oklahoma City from San Francisco was cut by John Aynes, Managing Director United Express Operations, and Mark Kranenburg, Oklahoma City Airports Director. This is the second route to launch between the airport and California this year.

The airport serving Oklahoma City in the US state of Oklahoma is named after the famous cowboy and entertainer Will Rogers. This week, Will Rogers World Airport welcomed a new United Airlines service from San Francisco operated by Skywest using a CRJ700, which is the airport’s second new service to California this year after American Airlines began daily flights to Los Angeles in April, a route which United already serves. In the last two years, the airport has also lost just two services, American to St Louis (a route still served by Southwest), and Delta to Cincinnati.

Passenger numbers at the airport have been unusually stable during the last decade, varying between 3.2 million and 3.7 million. Last year, traffic rose by 2.4% to 3.47 million, the same number as the airport reported in 1999. 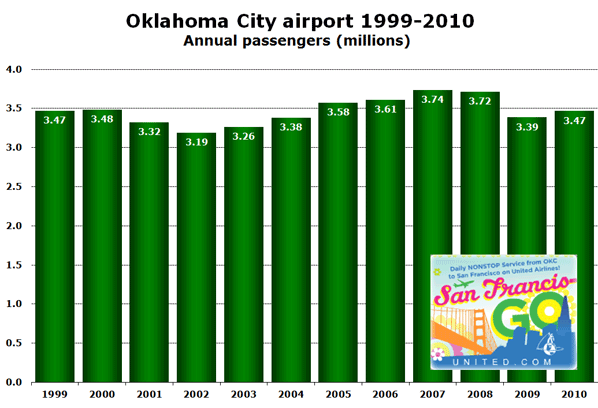 Analysis of current schedule data shows that six airlines serve the airport (assuming that Continental and United are still considered separate airlines). One notable absentee is US Airways, which does not serve the airport from any of its hubs.

Data from the US Department of Transportation’s Office of Aviation Analysis reveals that average fares from the airport have risen since the end of 2007. In early 2008, average fares were significantly below the national average, but rose during the year such that in 2009 and 2010 average fares have been around 4-5% above the national average. This reflects the fact that although Southwest is the airport’s biggest customer, LCCs (Southwest and Frontier) still account for under 50% of the airport’s weekly seat capacity. 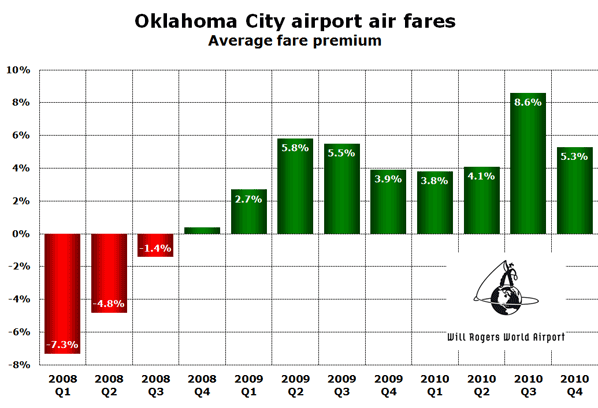