China Eastern’s Shanghai-Honolulu was an August anna.aero  Route of the Week  – and also the first scheduled service between Mainland China and Hawaii. The additional impact will go a long way to help Sino-US traffic pass the three million mark this year with the Hawaii Tourism Authority projecting more than 91,000 visits from China in 2011.

Direct air services between the two biggest aviation markets in the world (the USA and China) appear modest (for many years US carriers served the market via Japan, mainly Tokyo Narita) but have grown rapidly during the last 15 years and last year saw a record 2.65 million passengers on flights between the two countries. This was a 30% increase on the figures for 2007, 2008 and 2009, during which period the market stabilised at around two million passengers. By comparison, the size of the ‘open skies’ US-Japan market was 10.8 million last year, and 15.8 million between the UK and US – the largest transatlantic market. As China surpassed Japan to become the world’s second largest economy this year, presumably traffic will also easily pass through the three million mark in 2011 and continually leap forward thereafter.

However, the biggest barrier to new routes remains old-fashioned regulation – air services between the two countries are highly regulated by an Air Service Agreement (ASA) in which US carriers have to present their case to the US Department of Transportation (DoT). This means government agencies on both sides make the ultimate decisions on complex, risky, market-driven equations concerning frequencies and routes, rather than airline executives.

Some of these decisions are unsurprisingly controversial, while slot allocation – never a very transparent process at the best of times – is even harder to understand. Last year, despite the fact that Beijing is well on course to overtake Atlanta as the world’s busiest airport in a matter of months, mysterious slot problems at China’s capital airport delayed the launch of American Airlines’ Beijing-Chicago services by a month, although anna.aero covered the happy outcome of this episode in May 2010. 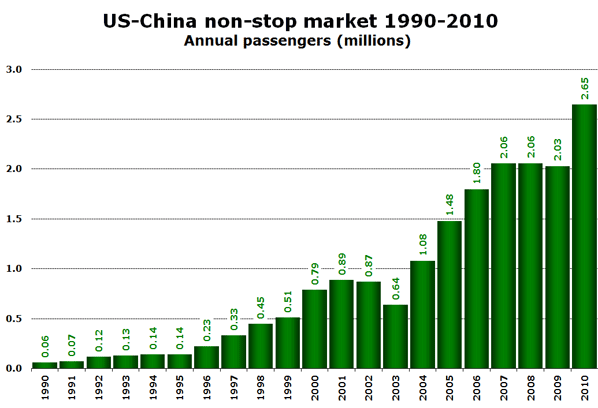 During 2010, four American and four Chinese carriers operated non-stop flights between US cities and Chinese cities. United was by far the biggest airline, transporting almost 850,000 of the 2.65 million passengers flown that year, well ahead of Air China (with just over half a million) and China Eastern and Continental who carried almost exactly the same number; 347,000. US carriers account for just over 60% of seat capacity, possibly reflecting the directionality of the traffic with many more passengers on the routes likely to be originating in the US rather than in China. 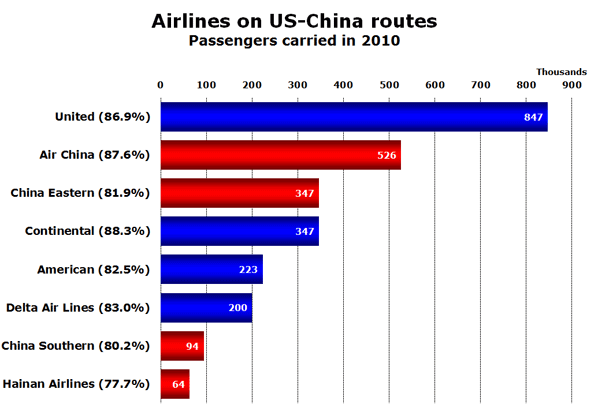 The airline with the best load factor is Continental, which filled over 88% of its seats on these routes in 2010. Overall, the airlines had a load factor of around 85%, an all-time record beating the 81% achieved in 2006. With the notable exception of Air China, the carriers with the lowest load factors were Chinese.

Six new services launched since the beginning of 2010 Yet another  Route of the Week  – this time in May when United launched Shanghai-Los Angeles. The airline already serves the Chinese city from Chicago O’Hare and San Francisco. The route is now also the most competitive Sino-US service following American Airlines’ entry in the same month, complementing an existing service offered by China Eastern. In this slideshow, Shanghai Airport Authority’s Deputy General Manager Hu Zhihong speaks to the press while James Mueller, United’s VP Asia Pacific explains: “Since United became the first airline to launch non-stop service from China to the US 25 years ago, we have continued to invest in expanding our network to support the growing relationship between our two great countries.”

US carriers have launched five new non-stop routes since the beginning of 2010, two each by American and Delta and one by United.

In China, flights are concentrated at Beijing and Shanghai, although China Southern has been operating flights between Guangzhou and Los Angeles since 1997. The complete list of current non-stop services is summarised in the following table.

The most competitive route is now between Los Angeles and Shanghai with both American and United launching services this summer to complement the existing service offered by China Eastern.

For further details of the history of US – China air services see here.